Back in July 2009 in the dark ages of this blog I first told you about Tilt A Whirl: The John Ceepak Mysteries Book 1 by Chris Grabenstein. Mystery, humor, and more are at work in this book and series. For Friday’s Forgotten Books today hosted by Patti Abbott I remind you of this very good read and very good series. 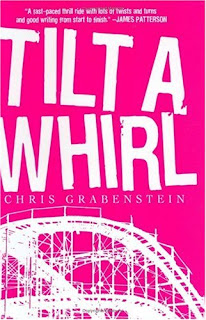 Sea Haven, New Jersey is an eighteen mile long barrier island consisting of motels, beach houses, bait shops, etc. For twenty-four year old Danny Boyle it is home and he works part time as an unarmed summer cop who helps with the influx of tourists in the muggy summer months. He just never expected to work a murder scene.

But, that is exactly what quickly happens because Danny also serves as the driver for John Ceepak. Ceepak used to be a military policeman, spent time in Iraq, and has been forced to deal with some really bad guys on more than one occasion. War is hell and Ceepak has lived it and has the memories. Ceepak is the man you want to follow into battle and is the man you want on your side. He lives by “The Code” that few these days can understand let alone follow.

The blonde girl, about thirteen years old, wearing a blood soaked dress and screaming as she comes up an avenue towards The Pancake Palace early one morning is a reminder that few live by Ceepak’s code. She is Ashley Hart, the daughter of Reginald and Betty Hall Heart. Betty Hall used to be on the local TV as the bubbly weather person. Reginald Hart was a businessman and real estate developer who did some rather unorthodox things and was very wealthy. Now, he is very dead having been gunned down on the Tilt-A-Whirl ride while sitting next to his daughter. The fact that the ride at the Sunnyside Play Land wasn’t even open yet this Saturday morning isn’t going to matter to the media or scared tourists. The fact that a crazed killer is wandering around the area is a chamber of commerce disaster and Chief Cosgrove wants it solved fast. He puts Ceepak and by extension his driver, Boyle, on the case. Murder is just the start of a twisting tale that ultimately leads to a horrifying conclusion.

Told at a fast pace, this is a read that quickly pulls the reader into the quirks of location and character. Both elements quickly come to life for the reader as back story is skillfully woven into dialogue and the occasional flashback. In a departure from most mysteries, the story is told in the first person from the Danny Boyle’s perspective while the real protagonist is Ceepak. This allows readers to get deeper into the Ceepak character because he is being observed while also getting a good idea of Danny’s character. It also works with the other characters that are never cardboard cutouts and instead are usually realistic and sometimes a bit quirky.

As some have noted, the cover does not remotely do justice to the book. Hot pink in background the cover prominently features a rollercoaster and not the ride depicted in the book. Though, there is a rollercoaster ride at the mythical Sunnyside Play Land so there is a vague link. While the design created by Michael Fusco seems very wrong, it does bring glances and inquires from folks when the book is out in public. More than one neighbor came over to see what I was working on now because they had spotted the cover as I sat reading on my apartment porch. Sometimes they came over at the most inopportune times.

The bottom line here is this is a book that fires on all cylinders and takes the reader on a very good ride. Sometimes funny, sometimes dark, this is a novel that quickly becomes riveting and one of the best I have read in a very long time. Start of a series, this is a very good one and a book you simply have to read.

Book provided by the author in exchange for my objective review.