Please welcome guest reviewer John Stickney to the blog today. This is his first review here and hopefully there will be many more.

THE LAST COLLAR by Lawrence Kelter and Frank Zafiro. Down & Out Books. 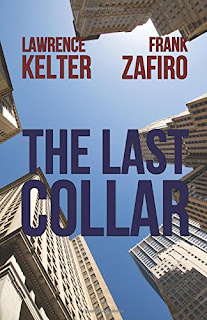 Not all police procedurals are created equal.  Some reach beyond the standard cliches.  The Last Collar delivers what we expect and much more.  Writing that is clean, fast and decisive.  Snappy dialogue, cops cracking wise in a funny back and forth.   We discover what the investigating detectives, Brooklyn Homicide’s finest Detective John “Mocha” Moccia and his partner Matt Winslow, discover, and are led to the make the same hunches and brought to the same conclusions.  We are also there as  larger personal questions are asked of Mocha.  So yes, we want our Ed McBain procedural, and it is delivered.  Collaborating authors Lawrence Kelter and Frank Zafiro add the unexpected, a little John Donne to the mix. 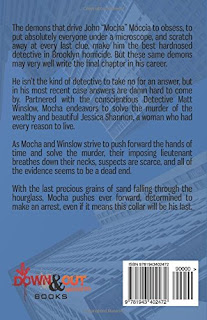 Our narrator John “Mocha” Moccia is relentless, working his cases in a methodical manner but obsessed to find justice for the victims.  His single mindedness cost him his marriage and he is a coast away from his young daughter.  Mocha is determined to help see his partner, Matt Winslow to his retirement seven months away.  They catch a case, a beautiful wealthy young woman, Jessica Shannon, strangled to death.  “Her face looks as distressed as Han Solo’s  sealed in carbonate.”  The case has some ‘high jingo’, Jessica’s father is a prominent wealthy defense attorney who is a member of the CPAC, the Citizens Police Advisory Committee which meets informally and regularly with the top Brass.  The suspects include a therapist  ex-husband recently released from prison after doing a stint for underage sex crimes.  A current boy friend who is an artist though his past includes various criminal charges including prostitution and theft.  Their Lieutenant Marcus Coltrane is putting on pressure to get the case solved.  “Why don’t your try coming to work dressed as a professional,” Lt. Coltrane tells Mocha,”instead of a substitute teacher.”  And Winslow, “A first year real estate agent.”

As the story develops we get hints that things are a bit off with Mocha, as he begins engaging in risky, out of character behavior.  He chases a suspected rapist down a dark alley without back-up, suffering a head injury.  He has unprotected sex with a street prostitute.  In a dalliance with a coffee shop waitress, he turns violently ill.  We learn how little time Mocha has left.  The second half of the book deals with personal mortality and Mocha’s sense of duty.


A note on method, The Last Collar is a book written in collaboration by Lawrence Kelter and Frank Zafiro. Both authors have published other books, Zafiro has written a crime novel The Back List  in collaboration with Eric Beetner.  As to The Last Collar, I am not sure what Kelter and Zafiro’s method of composition might be but the result is a seamless, enjoyable read.  Highly recommended.

ARC provided by Netgalley for a fair and honest review.

John Stickney is a writer formerly from Cleveland, Ohio now residing in North Carolina.  His fiction has appeared in Thuglit, Demolition, Needle, among others.
Posted by Kevin R. Tipple at 12:30 AM