It has been awhile, but author Terry W. Ervin II is back today with a new guest post. Today he talks about authoring with a partner and his new project with David Wood for Rock House and the sequel, Cavern.

I’d just completed proofing the galley for Thunder Wells, when I received an email from author David Wood, wondering if I might be interested in co-authoring a novella for the launch of the Dane Maddock Universe, a new Kindle Worlds series.
At first, I wasn’t so certain. Writing is often a solitary task, and it’d take me a little out of my comfort zone, and I had another novel ready to begin. But I knew David Wood, and have read and enjoyed many of his Dane Maddock books and figured: Why not. It’s only a novella.
So, after checking Amazon’s contract and the content specifications, I discussed the process with David (he’s been a part of at least a dozen co-authoring projects). Next, I came up with an idea for Rock House. After a little research, I outlined my storyline and emailed it to David.
While waiting for a reply, I began re-reading several of my favorite Maddock books, this time paying attention to dialogue, descriptions, mannerisms, and pacing. The Dane Maddock Series is sort of pulpy action-adventure, along the lines of a modern day Indiana Jones. My novels, and most of my short stories have a lot of action and adventure, but I mainly write fantasy and science fiction, so it’s not exactly the same.
The other challenge was getting the characters and tone right. Most of the readers would be the fans of the Dane Maddock Series. There was no way the novella would be 100% David Wood, style and content, but I wanted it to be close. I took notes and knew David would be doing more than his part.
In short, David emailed back, having added to the outline and offered suggestions, including specific examples of dialogue he thought would fit. From there I wrote the first draft, and revised it and emailed it back to David. He revised, sent it back with a few more suggestions, most of which I implemented. After an outside editor gave the novella review, David did the final proofing and off for publication Rock House went. 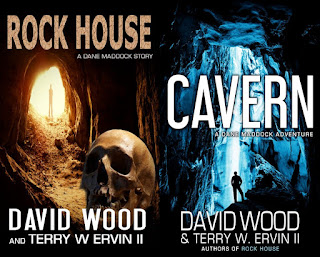 In the end, I’m glad I took on the challenge. Not only has Rock House, and the follow on novella, Cavern, sold very well, but I learned a lot along the way.
I learned to write in a different genre. That may not sound like a lot, but the scene construction, pacing and even the overall plot structure differed from what I was used to. Less world building and descriptions, more combining of scenes and content to propel the story forward.
Although some of my published short stories were written in the third person limited point of view, all of my novels have been in first person POV. Working with David strengthened my skill with third person limited, which better enabled me to write my most recent Monsters, Maces and Magic novels, both part of a LitRPG fantasy series.
Would I work on co-authored projects in the future? Yes, if the opportunity sounds like a good fit. Over the years I’ve heard about a number of bad experiences, but that’s fodder for another article.

Rock House and Cavern are his co-authored action adventure novellas (with David Wood), and Genre Shotgun is his short story collection, that includes SF, mystery, horror/suspense and inspirational tales. 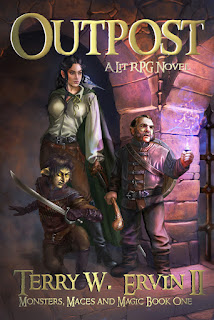 Terry’s newest series (Fantasy/LitRPG) Monsters, Maces and Magic includes Outpost, with Betrayal slated for release in April of 2018. He is currently working on Relic Shield, the third novel in the Crax War Chronicles.

To contact Terry or to learn more about his writing endeavors, visit his website at www.ervin-author.com, that of his publisher, Gryphonwood Press, and his blog, Up Around the Corner at uparoundthecorner.blogspot.com.
Posted by Kevin R. Tipple at 12:30 AM

I agree with you: working with a co-author can strengthen the work. My first experience with this was a YA mystery I wrote with my two sons when they were teenagers. It was based on a real experience. WHERE IS ROBERT? on the benefit of my younger son Dan's first person voice/point of view and my older son Andrew's story.
I did the actual writing but never could have written that particular novel without their collaboration. My mystery for Five Star/Cengage, THE THIRD EYE, was another collaboration, this time with Andrew. The book benefited by using two separate viewpoints.


I've never co-authored with anyone, Terry, but after reading your post, I can see the
potential opportunities to learn and expand. Maybe someday. . .

Jacqueline, you've had quite varied experiences with co-authoring.

If you can find the right partner, Earl, it can be a positive experience.