Review: Down The River Unto The Sea by Walter Mosley

Joe King Oliver has been out of prison for 10 years as Down The River Unto The Sea by Walter Mosley begins. A disgraced NYPD detective, these days he runs a small private investigative agency consisting of himself and his wise beyond her years teenage daughter. He does so from small office on the second floor of a building on Montague Street. Progress, as some would define it, is coming to the neighborhood which means rents are going up and the old places are being replaced increasingly by fancy condos, shops and, the like for above the pay grade of those who walk these streets and built the neighborhood. While Oliver got a sweet deal on the place and is fine for now the way he got it is just a small part of the hellish backstory his life was a decade ago. 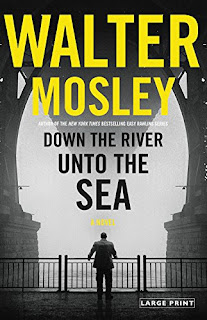 The fact that he never did what he was accused of didn’t matter because the frame was so good. He should have been killed. He wasn’t and yet the person he was died in prison. What happened to him is a case that will never be resolved. That is until he gets a letter that changes everything.

At the same time, he gets another case that also involves crooked NYPD officers. Two of them were gunned down several years ago. A man wounded in the shootout with officer is headed for the death penalty despite the efforts of well-known attorney Stuart Brown. It had looked like Brown was doing everything to prove his client known as “A Free Man” innocent of the murder. That is until the lawyer backed off, a witness disappeared, and more. A person involved in the case wants Joe’s help in proving A Free Man’s case.

Doing so might also be a way in for his own case.

What follows is an incredible read as Joe Oliver deals with repercussions from his past, the legacy of family, and the criminality of the moment. Author Walter Mosley, has a style in this read, as do the works of James Lee Burke, where the storytelling carries incredible impact with just a few words and at the same time paints a world rich in color and nuance. The two cases and a few other tangentially related matters slowly converge in one giant maelstrom that threatens to ensnare everything Joe Oliver has worked for these past years.

The read is intense, emotional, and powerfully good. A read that is so layered this review barely touches the surface. Down The River Unto The Sea: A Novel by Walter Mosley was my first experience with this author and it certainly won’t be my last. Highly recommended.  This is one of those books you just have to read. Period.