It is Friday and that means it is time for storms and rains here in North Texas with yet another severe weather watch later today. It also means it is time for Friday’s Forgotten Books hosted by Patti Abbott. We have a real treat here on the blog today as Aubrey Hamilton offers us her review of the 1966 book, Coffin Corner by Dell Shannon. Amazon does not list the month of publication. Depending on when it came out in the year, I was most likely 4 years old. Suffice it to say, I was not reading much back then and have not read this one. Be sure to check out the other reading suggestions for today over at Patti’s blog. 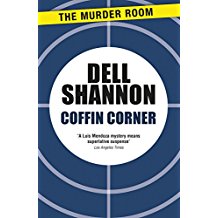 Dell Shannon was one of the pen names used by Elizabeth Linington to turn out an impressive list of police procedurals between 1960 and 1988. Set in southern California, they documented galloping societal changes and showcased her own conservative political leanings while portraying a Homicide team juggling multiple investigations.

Coffin Corner (William Morrow, 1966) is the 11th book featuring Lt. Luis Mendoza and his group of detectives in which they learn a suicide isn’t what it appears to be and neither is the heart attack of a thrift store owner. Officers sent to notify her family that Eliza McCann died in her store find an eccentric group living in a run-down hotel in an old section of Los Angeles. An undertaker with no customers, a convicted felon, a confused lady awaiting the return of her fiancé from World War I, a would-be opera singer, an astrologer, and similar offbeat individuals have drifted to the tired old building because of its low cost and lack of judgment from other residents. Their oddities are no more than a conversational tidbit among the detectives until the autopsy reveals Eliza was poisoned. Then the question of just how strange these people really are becomes serious police business.

Linington must have had a good time writing this story, the characters are entertainingly bizarre and the plot stops just this side of over the top. It’s hard not to think The Addams Family television show, which premiered two years before this book was released, inspired her. Linington sketched breathing characters in a few words and her plots were inventive. Her meshing of the personal lives of her detectives with their professional lives was a pleasure to read. I always loved her books and they were on my must-buy list as long as they were published. I find though their descriptions of life in southern California in the 1960s and 1970s were just a little too faithful and they didn’t wear well with time. Her practice of talking about how much everything costs profoundly dates the books and the casual racism is jarring. And with all of the scandals of the past 25 years, it’s hard to see any police force as unreservedly wonderful as they are portrayed here. Still, she wrote fine detective stories and Linington was on top of her game with this one.

Oh, I loved these mysteries by "Dell Shannon". I picked up whatever I could at the library.

Soon as I say this title I started humming run run runaway... and damned near got kicked out of the library! Have never read a Dell Shannon mystery, but now that I know he's really a she and not a 50's bopper, I shall search for possible ebook versions of her novels. Thanks for setting me straight!

I had forgotten about Dell Shannon! I had never read one of hers but my mother did. I was reading some non-fiction cat book-- maybe it was one of Doreen Tovey's but I'm not sure-- and she mentioned her friend Elizabeth who was a cat fan and wrote mysteries under the name Dell Shannon. I think that was the first time I realized Dell was a woman not a man. I'll have to pick up one or more of hers....

While I can and do hum Runaway, I don't think I ever read any of these.