Please welcome author Lisa Lieberman to the blog today. Among other books, she is the author of the Cara Walden series of historical mysteries which started with All The Wrong Places. The second book in the series, Burning Cold, is currently available at a reduced price of 99 cents. 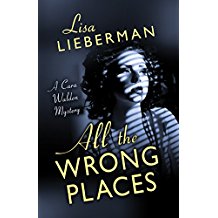 The first time it happened was in a beauty salon. My protagonist, Stevie, a counselor on a suicide hotline, was trying to help her friend Ray, the center’s volunteer coordinator, who was a suspect in a murder investigation. He’d been having an affair with one of the volunteers—an ethical no-no—and she’d dumped him. Next day, her body turned up in the parking lot after her shift.

The victim worked as a hairdresser and Stevie goes to the salon to find out who else might have wanted her dead. She’s having a manicure—her first ever—and the manicurist is trying to talk her into getting French tips. I’d given the manicurist the unlikely name of Pia; the story was set in a small midwestern city and I imagined her dreaming of getting out someday.

Stevie is bored and curious. “I’ll let you give me French tips if you tell me your real name.”

Honestly, I hadn’t meant to let a minor character hijack my story, but once I’d named her, there was no going back. Pia the manicurist had her own reasons for withholding her true name, evidently. Stevie had to shell out for a facial before she got the information she sought from Daniél, the gay esthetician whose treatment room was decorated with stills of Liz Taylor in various roles. “She must taste like butter,” he says, coming up behind Stevie when she’s admiring a photo of Liz in BUtterfield 8. Yes, I did get a facial once from a guy like that. I’ve forgotten his real name, but I never forgot that line.

I collect oddballs. (If any of my friends are reading this, of course I don’t mean you!) Sometimes, when I’m rooting around for a new character, I’ll repurpose a memorable line or a bit of decor, select clothing and hope the end result isn’t Mr. Potato Head. I’ll know I’ve succeeded when the new character shows a bit of attitude, like Pia did, or when he brings out an unexpected facet of my protagonist.

Maybe I should get out more. Writing a story, for me, entails entering into a conversation with my characters. Why have a conversation if you already know what the other person is going to say? With a novel, it may not be until you reach the end of the first draft that you start to figure our who your characters are and where they’re going. In a story, you can let go, play a little.

Have some thrills. You’re in good company; the hijacker is your creation, after all. Take the plane off autopilot, do a few loop de loops. You’re still in control and there’s plenty of room for a nice, smooth landing.

Lisa Lieberman is the author of the Cara Walden series of historical mysteries featuring blacklisted Hollywood people in exotic European locales. All the Wrong Places and Burning Cold are available from Passport Press in print and e-book. Trained as a modern European cultural and intellectual historian, Lieberman abandoned a perfectly respectable academic career for the life of a vicarious adventurer through dangerous times and places. She has written extensively on postwar Europe and is the founder of the classic movie blog Deathless Prose. She now directs a nonprofit foundation dedicated to redressing racial and economic inequity in public elementary and secondary schools. She is a member of Sisters in Crime and Mystery Writers of America.