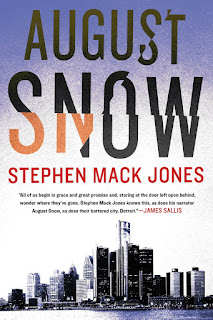 With twelve million dollars in the bank and after a year sabbatical overseas, August Snow has  returned home to the house he grew up in the “Mexicantown” area of Detroit Michigan. The old neighborhood, much like the rest of Detroit, has taken a beating and is struggling to survive. August Snow has do ne his part by putting some of the money he won from the city after his wrongful termination from the police force into his house as well as some of the neighboring houses. The son of an African-American father and a Mexican- American mother, August Snow is trying to rebuild his life and finally come to terms with his past.

While August Snow is back and very quietly minding his own business, some welcome his presence and many others do not. One of those that welcomes August Snow back is Captain Ray Danbury of the Detroit Police Department. One of a very few friends on the force, Danbury is acting as a messenger for a wealthy widow by the name of Eleanore Paget.

Eleanore Paget wants August Snow and reached out to her numerous contacts to spread the word. She has been difficult in the way only the rich can. It isn’t long before August Snow is out at her expansive estate at Grose Point. It isn’t the first time he has been at her home and that ties into the reason she wants him now.

Owner of a private wealth management and investment bank, Titan Investment Securities Group which dates back to the late 1800s where her great great grandfather started it, she is sure something is wrong. She can’t provide actual details other than a sense she is being frozen out by the CEO, the board, and other parties. Even though August Snow is not licensed as a private investigator, she wants his help and is not pleased when she does not instantly get it. While he can look at a few things for her, there is not much he can do.

Within hours she is dead and her name is added to the long list of regrets in the life of August Snow. He also knows that her death certainly was not a suicide. He begins to investigate and soon enters into a modern day war zone hotter than anything he saw in combat overseas.

August Snow by Stephen Mack Jones is an incredible read. Much like Down The River Unto The Sea by Walter Mosley, inherent racism is a dominating character at work throughout the book as is the consequences of serving on a police force and the loss of a career and that legacy. At the same time in August Snow the power of wealth and what it can do for good and evil is also a major point of the book.

At it is heart, the book is part thriller, part mystery, and part crime fiction. The ratios of those parts change a bit from page to page and chapter to chapter as author Stephen Mack Jones crafts a read that is very hard to put down. The result is an often intense read that blends in relevant social commentary while not slowing down a bit.

I had never heard of this book until I recently read an excellent review of it by David Nemeth. You should read his review and check out his other offerings at his Unlawful Acts website.

Copy provided by the good folks of the Lochwood Branch of the Dallas Public Library.

Terrific review, Kevin. I will check this book out as I am always intrigued by stories set in Detroit. I grew up in a suburb of the city and still have relatives there.

Thank you. Being coherent in a review is way more difficult these days.

Anyway, I enjoyed it very much. If you read it, I hope you do too.