Aubrey Hamilton Reviews: What You Break by Reed Farrel Coleman 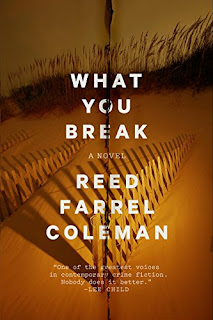 What You Break (Putnam, 2017) is the second book from Reed Farrel Coleman about Gus Murphy, a former Suffolk County NY police detective whose personal and professional life shattered a few years earlier. He has slowly been putting the pieces back together. He’s found a job at a third-rate hotel, where he serves as their security officer, airport van driver, and weekend nightclub bouncer. Gus has been seeing Magdalena, a bartender and an aspiring actress for awhile, when she is offered a role that will take her to Detroit for several months. Gus is trying to decide if their relationship will survive the separation when a passenger on a routine trip from the airport kicks off his internal alarm system. His suspicions are heightened when the newcomer and Slava, the hotel doorman, appear to know each other.

Worried that this new visitor to the hotel has brought trouble, Gus is watching him the next day when he and Slava drive away together. Gus follows them to a New York neighborhood and witnesses the professional execution of the man they were visiting. The ensuing police investigation leaves Gus trying to protect Slava while explaining why he was there.

In addition to this hotel-related problem, Father Bill, the long-standing friend of Gus and his family, asks Gus to take on a paying client. The grandfather of a murdered teen offers Gus considerable money to learn why the murder was committed. The police have identified the killer through unshakeable DNA evidence but no one understands how the girl crossed the path of the hardened gang member to begin with. Not sure that he can do more than the police have and disliking his potential client, Gus reluctantly agrees to look into the case.

Juggling both investigations along with his unexpected relationship problems, Gus learns that two of the men involved have committed unspeakable crimes. One is overwhelmed with guilt and the other is chillingly remorseless, providing an intriguing contrast.

Gus is an appealing character. Unlike many damaged protagonists, the wounds that Gus has suffered have healed enough to create some protective scar tissue, which is allowing him to create a new life while not forgetting the old one. Publishers Weekly starred review.