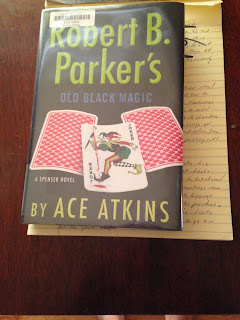 Robert B Parker’s Old Black Magic: A Spenser Novel is the seventh since Ace Atkins took over the franchise and is another good one. Mr. Atkins continues to stay true to the series while also his own little changes to bring some new life into the characters. At the same time he also acknowledges the passing of time and how none of us are going to get out alive. Contrary to what happened before in much of the series, folks are now aging and Spenser is frequently contemplating the mortality of both man and animal. That concept was present in the previous novels written by Mr. Akins, but makes its presence here in multiple ways almost to the level of a character in the tale.

It is early summer, a light rain is falling, and Locke has come to Spenser’s office with one last request. Locke has terminal cancer and wants the case that he has chased for almost twenty years solved. Three paintings were stolen from the Winthrop Art Museum almost twenty years ago in what remains the biggest heist ever. While some would consider the works priceless, others place the value in the tens of millions. Locke has chased the paintings ever since with little to go on over the years.

With the twenty year anniversary of the theft coming up a person or persons unknown has started sending letters to the museum’s director, Marjorie Ward Phillips. The letters don’t seem to be a ransom demand. The letters do communicate details of the theft that only those directly involved would know. Locke has put in a word with the director and has made it clear that he wants Spenser to finish what he started. Take over the case, find the paintings, and bring them back where they belong. Locke thinks the letters will lead to a real chance to recover the paintings and wants Spenser, as a favor to a dying man and friend, to take the case.

How do you say no to a dying man?

You don’t. Spenser certainly can’t. From the start at least some of the museum’s board absolutely does not want Spenser involved. There are those among the criminal element at Boston who don’t want him involved. Local law enforcement also would prefer him to stay out of things. Still, a promise was made to a dying man, so Spenser isn’t about to go away. Nor are many others who only care about getting a piece of the five million dollar reward.

Robert B Parker’s Old Black Magic: A Spenser Novel is a solidly good read. Ace Atkins does a nice job of weaving the old and new in terms of characters and settings while also crafting a mystery with plenty of misdirection. People and places evolve over time and those changes provide a nice background nuance to the highly entertaining read.

So glad to see that Atkins is keeping the best of Spenser as created by Robert. B. Parker, while bringing in new elements. Good review.