Saturdays With Kaye: Death on Nantucket by Francine Mathews

Death on Nantucket by Francine Mathews 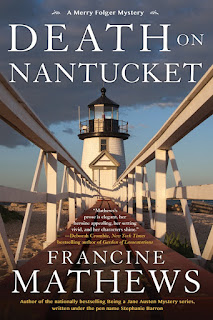 This fifth Merry Folger mystery starts slowly. A woman named Nora has come home to visit her father, Spence Murphy. Everyone knows who Spence is, a journalist who has become famous for his writings, but the cab driver doesn’t know who Nora is. Even some of the family have never heard of her, an adopted daughter. Meanwhile, Meredith Folger is planning her wedding to Peter Mason in a few months on the beautiful island.

The gentile surroundings, seaside houses of the privileged, and the prosaic lives of the inhabitants, lull the reader along pleasantly until…there’s a body. It belongs to Nora. Now old resentments start bubbling to the surface. Spence lives in a huge, rambling beachside house called Step Above. He’s getting more deaf and confused as he ages. His family is surprised to learn that Nora had been to see Spence a month ago, but much more surprised when her body is discovered a month later, on the decrepit roof walk where no one ventures. It’s learned that Nora, a former journalist, was planning on writing a book that could cause trouble.

Detective Merry Folger is assigned to investigate Nora’s suspicious death, her body too decomposed to glean many details. Her ogre of a boss is trying to make her life so hard that she’ll quit the police force. The case is hard enough. She doesn’t think any of the family members feel much grief over the passing of their patriarch. When dried apricot seeds are found mixed in with the coffee, and the coffee cup found beside the body is discovered to contain the residue of coffee, milk, and cyanide, the investigation is off and running. Family animosities swirl, making it hard for Merry to solve this cozy-feeling crime. The deeper she delves, the more tangles she discovers, blocked by dark histories that have deep roots. The story is lovely and atmospheric, with a sinister crime to solve.

Bonus: the reader learns how to prepare bluefish properly.


Reviewed by Kaye George, Editor of, Day of the Dark: Eclipse Stories, for SuspenseMagazine.