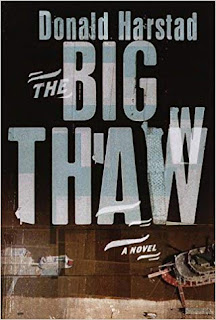 The Big Thaw by Donald Harstad (Doubleday, 2000) is the third in the Deputy Sheriff Carl Houseman series, six police procedurals set in rural Nation County, Iowa. It’s January with at least a foot of snow on the ground and the temperature has been below zero for so long everyone thinks their thermometers are broken. Carl is rousted out of bed to help chase a burglary suspect who slides off the icy road into a ditch. Once extracted from his wrecked car, the police recognize Fred Grothier who is known to be guilty of a range of minor crimes. Questioning reveals he and his cousins are the perpetrators of a string of recent break-ins, visiting the empty homes of residents who found a warmer place to spend the winter. Fred startles Carl and his colleagues when Fred tells them he was driving around looking for his cousins, who have disappeared. Fred dropped them off at a home whose owners were known to be out of town but the cousins were not there when he returned to pick them up with their loot.

Carl and a couple more from the sheriff’s office go to the house in question and search it from top to bottom. The frozen bodies of the cousins are found under a tarp in a tool shed, shot execution-style with Russian automatics. Russian weapons are not all that common in Nation County, where the U.S.-made shotgun and rifle are the usual guns of choice. The entire sheriff’s office is mulling over this strange turn of events when some of the state FBI agents show up. The simmering rivalry between the local boys and the FBI know-it-alls flares up, and a convoluted but fast-moving story unfolds.

Harstad was a deputy sheriff for more than 25 years and it shows in the precise and exhaustive description of crime scene investigations. Similar to the Jake Hines titles by Elizabeth Gunn and the Posadas County books by Steven Havill, this series balances the personal lives of the characters with authentic police work in a rural setting where there are never enough law enforcement personnel to go around. Highly recommended.