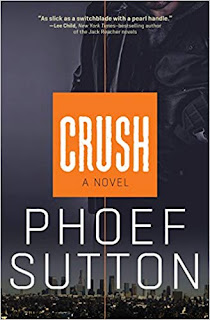 Crush by Phoef Sutton (Prospect Park Books, 2015) is the first book about Caleb Rush, son of a Russian Mafia kingpin. Rush turned his back on the mob and escaped with his mother to southern California to start a new life. He supplements his work as a bodyguard with serving as a bouncer for a nightclub where his taekwondo master is the bartender. His enormous physical size earned him the name Crush. Despite his appearance, he still manages to fade into the background until he needed to be noticed.

It was business as usual at the nightclub as the book opens. Crush whisks two fighting semi-drunks off the dance floor and out the back door so smoothly no one notices. He rescues a girl who’d been given rolfies from the gang who doped her. When a couple of guys with serious tattoos in a Lamborghini try to kidnap the blonde that’s been hanging around watching Crush in action, he engages in ferocious fisticuffs while the girl disappears. After the fight is over, she re-appears in the back seat of his car, wanting to hire him as her bodyguard. When he learns her name, all Crush wants to do is to avoid her, the daughter of a corporate magnate who had him blackballed in the security world years ago after Crush protected a call girl from him. Crush decides to serve as Amelia’s bodyguard after all just to annoy the magnate’s security firm who fired him after the incident with the call girl.

From there it’s one car chase or punch-up after another in this fast-moving story with great characters and a couple of interesting surprises. A sly wit infuses the story: Rush decided “after meeting Stanley Trask … that he was a filthy rich, arrogant asshole. … Trask … probably stole loose change from his left pocket when his right pocket wasn’t looking. In other words, it was an honor to be protecting the guy.”

There’s an intriguing subplot about one of the people destroyed by Amelia’s father’s wheeling and dealing. While her father came out of a corporate bankruptcy just fine, many of his franchisees were completely ruined. This one is so embittered he decides to take his revenge and fails spectacularly.

A fine read with two more in the series so far. Kirkus starred review.

I thoroughly enjoyed both this book and a sequel. I look forward to reading the third volume.