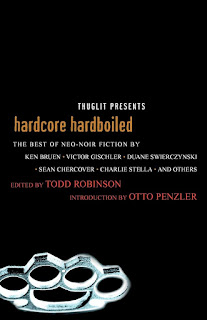 Back in 2008, I first told you about the anthology, Hardcore Hardboiled. Edited by Todd Robinson, I still hope that Thuglit will return to slap readers in the face. In the meantime, go get this one. Make sure you check out the full list of reading suggestions for today over at Todd Mason’s Sweet Freedom Blog.

From the introduction written by Otto Penzler:

The contributors to this volume are mostly young (even conceding that nowadays everybody seems young to me), writing in a style as colorful as Elton John's laundry. It is mostly vulgar, nasty, obscene, violent, and sewer-mouthed. It is visceral, unadorned and crueler than a puppy juggler. Lines that you could quote to your mother are harder to find than Amelia Earhart.

And that pretty much sums up this book. The language is graphic, the action is graphic as well as often intense and very messy and the characters are, well, for want of a better term, graphic. They also are usually messy, obnoxious and would rather cuss you out and step over your body as you lay in a pile of vomit (your own or anyone else's) and no doubt would laugh if you hurt yourself accidentally and rather painfully. Most of the folks in this book you don't want knowing your family and you sure as heck don't want them knowing where anyone you care about lives. That is, unless you want somebody you care about or are still saddled with dead.

Simply put, you can't see the land of cozy style novels from here. If cozy style novels were one extreme, this book is as far as you can get away from there in the opposite direction. Cats don't solve crimes here. If any cats were involved, they would be fired off on catapults while still alive because a screaming target to shoot at is always more satisfying than some chunk of clay. 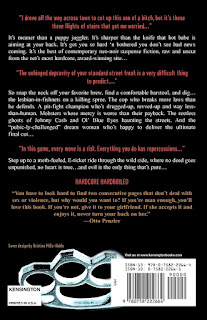 This dark and often twisted anthology of twenty-four stories written by twenty authors is a good one and features what Editor Todd Robinson aka "Big Daddy Thug" felt were the best from the year of Thuglit.Com. You'll recognize some names you know from elsewhere and most likely have no clue about a bunch of other names. If you check out the end of the book you will find a salute to those involved with Thuglit which include those names that you know and others you don't that didn't make the print edition. Packed in this anthology are twenty-four powerful and dark stories so there are way too many to go into depth at all on them. Instead of trying to cover all of them, here are a few personal favorites of mine to give you some idea of what is in the paperback book.

It opens with "Ten Dimes" written by Mike Toomey. A customer in a bar is looking for a fence because he wants to move some merchandise. Not ordinary stuff by any measure. This legendary stuff and he wants a fence on the Vegas Strip bad.

"Johnny Cash Is Dead" according to Jordan Harper who weaves a tale of a man on a mission of justice. If he planned things right then the stairs will be the hardest part of the job.

Tim Wohlforth in his story "Juanita" tells a tale of dealing with the stinking mess the best she can. Sure, she is very glad that somebody got the [...], but they could've cleaned up the mess for her too.

J. D. Smith in the story "False Alarm" points out how worthless car alarms these days because anything sets them off and nobody pays attention. Shooting the damn thing sounds like a good option if the story's narrator can't get any help.

It seems like addition to his excellent novels, stories written by Frank Zafiro are popping up in every anthology known to mankind. Frank is in this one as well with his story "Rescuing Isaac" which concerns a guy arrested in a theft and the fact that his bosses are a bit concerned he might not be able to keep his mouth shut.

Then there is "Counterfeit Love" penned by Jeffery Bankgkok where there is more then one way to deal with a step mom.

Stories by Ken Bruen, Sam Edwards, Ryan Oakley, Sean Chercover, Hana K. Lee, Mike MacLean, Donovan Arch Montierth, Victor Gischler, B. H. Stepherd, Vinnie Penn (who really seriously disturbed me with his story), Bill Fitzhugh, Vincent Kover, Duane Swierczynski, Patty Templeton, Stephen Allan, Bryon Quertermous, David Bareford and Charlie Stella all made the cut for this dark and often disturbing anthology. These are characters often past their breaking point and past caring about themselves let alone anyone else. They don't clean up well and are not interested in what you think unless some money might be involved one way or the other

Some characters are detailed with depth while others are scarcely described or explained at all. Some stories are subtle about the violence and others are intense and stomach turning graphic. Being male in this book often has a very bad outcome involving pain, loss of lots of blood and death. Some stories are intensely action based while others are more of a conversation between two people with the anger and the violence unseen but rippling below the surface. Therefore, it isn't simple to characterize author style or development because every tale is pretty different than the others in the anthology. It is hardboiled fiction from front to back of the book and one that will make you often cringe and almost never chuckle.

The common denominator beyond being hard-edged is that one really better watch what they wish for because it often comes in a very bad way.