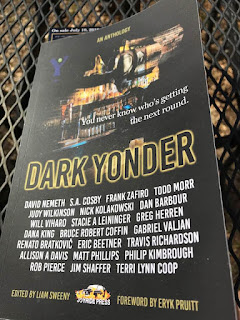 Dark Yonder: Tales and Tabs is billed as an anthology of crime stories. It certainly is and there is not a bad tale on the book. The read is far more than a crime anthology of often powerful short stories. It is a book that pays homage to what is clearly a loved bar by so many of the authors involved in the book. The bar and the setting for nearly every story, Yonder: Southern Cocktails & Brew, is not one of those trendy hipster bars with the staff decked out in bling and man buns on half of the males and wanna be males in the place. Instead, Yonder: Southern Cocktails & Brew is a serious bar and one that has a legendary history and character to it. While I have never been there, it is clear that the place is a throwback to the past and a serious bar with many stories to tell.

Some of those stories have made it into this anthology edited by Liam Sweeny. Published by Joyride Press last year, there is also nonfiction in the form of essay observations, many black and white pictures of customers and staff, and more than a few drink recipes. In fact, because very story is led off by a drink recipe, there are nearly two dozen drink recipes listed in the read. Those same drink recipes contain no amounts regarding ingredients because one is encouraged to “live a little.” That concept of “live a little” is often what happens in these tales with some deadly consequences as well as the resulting biohazardous material messes to clean up.

After a forward from Eryk Pruitt, he also offers a piece on how a drink and a bar experience should be as opposed to how things are these days in many places. That is followed by a piece by Dan Barbour on his real life musical experience in the aforementioned drinking establishment. Then it is on to the twenty-two stories published in the Dark Yonder: Tales and Tabs anthology. As noted before, there is not a bad tale in the bunch. Several can cause laugh out moments. So, grab your favorite beverage and take a few minutes to read this review as each tale is briefly explained. That explanation is done without the use of herbs, bitters, or spoilers. The various illustrative pictures in the read can’t be explained. You just have to see them for yourself. Those pictures have their own tales to tell.

Travis Richardson gets things started with “Them’s Fighting Words.” Grady Edwards just wanted to be left alone. Then Eryk Pruitt and Drew showed up asking questions about the murder of Jessica Talbert. Wesley Winston spent twenty years of his life in prison until that damn DNA test cleared him. If that had not happened, Grady Edwards would not be dealing with this porch problem.

He knew she wanted to be left alone when she came into the bar by herself. He’s seen her before, usually with a bunch of coworkers, and knows that her name is Alana. He also knows she has a problem of some sort in “Run Its Course” by Frank Zafiro.

A late meeting at Yonder: Southern Cocktails & Brew is planned between a reporter and the man known to all as “Popcorn.” The legendary moonshiner might or might not show up for the meeting. If he does and does wish to tell it, he has quite the story to tell in “Popcorn” by Gabriel Valjan.

Will Viharo is up next with the short story, “Living Proof (A Vic Valentine Vignette).” The private investigator in from San Francisco is a long way from home as he walks into the North Carolina bar. This is a case that will get stranger by the minute as Vic Valentine quickly learns he is far from home in more than just the physical sense and is way out of his depth.

It has been a hard two years for Jewel since the FBI shut down the family law firm. She is skittish and she has good reason to be so in “Off-Label” by Terri Lynn Coop. Even with Max Geno present and her favorite adult beverage available, she knows this is not a social meeting. 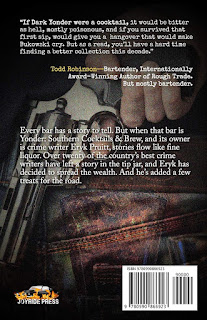 Freddie the Cripple has a certain reputation and one that he likes to exploit here and there. In “Yonder There’s aMargarita” by Matt Phillips, he also likes a decent margarita. He likes the bar, Yonder: Southern Cocktails & Brew, as well and really does not want to do the job he has been hired to complete.

Gordon has been working on being a regular at Yonder: Southern Cocktails & Brew. Part of that process is always sitting on the same stool and therefore claiming it as his own. Tonight is starting off wrong from the get go in “The Regular” by Eric Beetner. As often happens in bars, making your claim for respect can result in violence.

Why the customer brought a ventriloquist dummy into the bar no one really knows. If the guy would just drink his drink and do it quietly, things would probably okay. But, he won’t. Before long the dummy, Slappy Sacramento, is talking way too much in running’s its mouth way too much in Todd Morr’s short story, “Slappy Sacramento.”

When your insides are making like explosive lava, it is nearly impossibly hard to be a quiet criminal. “Huey and the Burrito of Doom” by Nick Kolakowski need little explanation. The tale is dark, twisted, messy, and more than a little funny.

She may be beautiful, but she is cold too in “The Door in the Floor” by Allison A. Davis. She also knows exactly how her drink should be made. She also seems to know far more than she should about a lot of things. It is past time to get the boss, Eryk Pruitt, on scene to deal with her.

Technology is wonderful until it isn’t. Everything started off innocently enough in “Close Your Laptop” by Judy Wilkinson. One little thing lead to another and now, thanks to technology, she knows far too much.

The plan is to recue Darlene’s little sister in “They Have Fancy Drinks Named After Famous Writers” by S. A. Cosby.  Give the pimp some money that is more than it seems. The plan is to fool him just long enough to get him out back of Yonder: Southern Cocktails & Brew and then give him the beat down he deserves to find sixteen year old Julie.

Editor Liam Sweeny is next with the short story, “Legs Diamond.” Life has been hard and Rory is doing the best he can. He’s figured out Eryk Pruitt is a good man. Finding the body proved the point.

Being a salesman is a tough gig in “The Proposition” by Phillip Kimbrough. He still has one more deal to clinch before the night is through.

Bob Dinkerman got himself murdered behind the bar known as Yonder: Southern Cocktails & Brew. According to the officer testifying in court in “Llama Juice” by Stacie Leininger he had it coming. For good reason as is made clear.

Not all battles are fought overseas. Some are fought here at home every single day as one does what one has to do to survive while desperately trying to forget the past. That works until the past is again right in front of you in “Moist Money” by Greg Herren.

Unlike that Gordon dude mentioned earlier, Belle is a regular and very much welcomed. She always sits at her place at one end of the bar in Yonder: Southern Cocktails & Brew. A classy lady, she likes her drinks in a certain way in “Old Fashioned” by Bruce Robert Coffin. She, like the place itself, is a throwback to the past and history.

It is hard to breathe when somebody holds you under whether it is water or whiskey. He really should not have caused Fat Phil an issue. He did. Now he is in a really bad spot as “The Big Splash” by Renato Bratkovicͮ begins.

When you get a bunch of crime writers to read at the bar things can escalate. A fight could break out. More than just about anyone else, crime writers know to and will use any weapon necessary. “Noir at the Bar Fight” by Dana King is a tale that will not be explained further other to say it is funny as all get out.

The suited men were clearly out of place when they walked into Yonder: Southern Cocktails & Brew. Frank Smith and Eryk Pruitt know that there is going to be a problem in “Two Clowns Walk into a Bar” by Jim Shaffer. The suits work for a certain loan shark and he wants his money now one way or another.

David Nemeth’s short story, “Retribution” comes next. An early close should have meant a peaceful evening. It didn’t. Now Heppy has arrived and he is most definitely a problem.

The regulars call her “Hazel” and for good reason In “Not Enough to Drink” by Rob Pierce. Hawthorne is not a regular so he does not know anything when he sees her in the bar. He also has been without sleep for over 36 hours. He has a plan and intends to get what he wants from her the easy way or the hard way. She just wants to drink in peace in this final story of the read.

Edited by Liam Sweeny, Dark Yonder: Tales and Tabs is a solidly good crime fiction anthology. Violence and mayhem make a frequent appearance in these tales where everything may not be as it seems at first glance. There are secrets at work and the bartender many know just a few of them.

I’m pretty sure this is one of those reads where a lot of insider style jokes went right by me because I am not a part of the right crowd. I have never been to the bar in question and have only been to two “Noir at the Bar” style events. Many of the authors in the book I have never met. A few of them I did very ͮͮͮbriefly meet at the recent Bouchercon in Dallas. I am also sure there are some insider stories behind the many black and white pictures from inside the bar that show various folks involved in the book. I am also sure that I picked up the main stuff that made Dark Yonder: Tales and Tabs a mighty good read.


My reading copy came because Johnny Wesner put in a word and my address with Eryk Pruitt who I had met briefly at his “Noir at the Bar” event at Bouchercon 2019. Because of the efforts of the man who markets himself as “Sweet Johnny,” Eryk then sent me a signed paperback copy with no expectation of a review.

And I assure you, no insider jokes in "Run Its Course." But you're probably right about that -- I'm sure I'm missing them left and right, too!

I meant the book as a whole. Not your story. Some tales name dropped a bit more than others and had various writers in the tale and those stories were the ones that I think I missed some things.