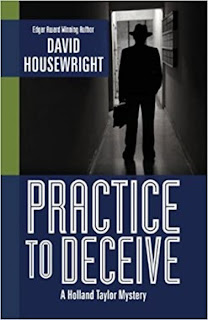 I thought I’d read all of the books David Housewright wrote about Holland Taylor, the ex-cop turned private investigator in the Twin Cities. However, a few pages into Practice to Deceive (W.W. Norton, 1997; reprint Forty Press, 2013) and I realized I could not have possibly forgotten a story this funny. It doesn’t start out funny; Holland’s parents, now living in Florida, are enraged by the treatment a fragile neighbor received from a Minnesota investment counselor. After Holland hears the story, he’s enraged too, but not sure he can do anything.

Levering Field assures Holland that he is sorry he lost $287,000 of the widow’s money ($465,000 in 2020) but those are the vagaries of the investing world. When Field and his attorney also promise Holland that the elderly widow will be long dead before any litigation Holland initiates will be resolved, he begins to see red. The final blow was when Field says he’s placed all of his assets in his 16-year-old daughter’s name and a successful lawsuit will yield nothing of value.

Holland sees their point and decides, since the courts can’t help, he will simply harass Field until he gives the money back. He commences a program of relentless abuse that is worthy of a gang of pranking teenagers. Ordering pizzas to be delivered to Field, offering Field’s house for immediate sale, and setting up a profile in Field’s name on a dating site, nothing is too juvenile for Holland. Setting a squirrel loose in Field’s BMW is my favorite. Things get more serious when he enlists a cross-dressing computer hacker to crack Field’s bank accounts and close his credit cards. The hacker is one of the most original characters I’ve encountered recently.

Field throws in the towel and agrees to return the money if Holland will just stop. It’s one of the last things he says, because when Holland arrives to pick up the money, Field is dead. Holland is a prime suspect of course but his alibi is solid and the police have to look for someone else. That’s when the tables are turned and Holland becomes the focus of a series of petty and not-so-petty incidents as well as a couple of murder attempts.

In between setting the reader up for snickers and guffaws, Housewright delivers a tightly plotted and well-executed mystery. It’s clear he had more fun devising practical jokes and annoyances though. Highly recommended.

There is unrest on the San Carlos Indian Reservation in Arizona in the late 1800s as some are agitating for the Indians to unite and leave.... 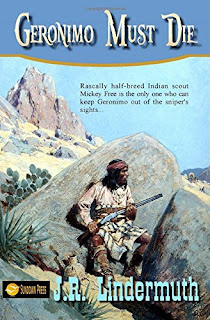