Review: A Bad Day For Sunshine: A Novel by Darynda Jones 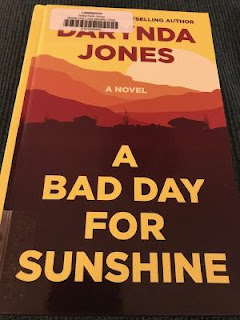 Sunshine Vicram is back in Del Sol, New Mexico, with her teenage daughter, Aurora, better known as Auri. She is also less than thrilled about living in the small tourist town of Del Sol again. Even if it is home for her parents and she and Auri are in the guest house about fifty feet from their backdoor. She is also not thrilled about being the newly elected sheriff. Especially when she wasn’t even running for sheriff far as she knew.

But, being elected in Del Sol when you are not even running for sheriff is not the strangest thing to happen in Del Sol as Sunshine Vicram well knows. She has been gone for nearly fifteen years and now that she is back, she is reminded again that Del Sol has a sun that never quits and neither does the strange.

While her fourteen year old daughter deals with her first day at Del Sol High School, Sunshine Vicram arrives at the station in her full uniform to see what her first day will bring. It soon brings a visit from the Mayor and a basket of muffins. The mayor is a problem, but nothing she can’t handle at this point. The muffins are another and, according to everyone else, a far more serious problem. Homemade by Ruby Moore, they certainly look and smell good. Ruby Moore can certainly bake as all can attest. The problem is that when she sends in food, trouble always follows. It does not matter if they eat the delicious offering or not, trouble is coming. They just do not know it yet.

Minutes after consuming the delicious goodness, they soon find out that they have a major problem on their hands. Wealthy new resident Mrs. St. Aubin reports that her daughter, Sybil, same age as Auri, is missing. She vanished during the night. Mrs. St. Aubin woke up this morning and realized that her daughter was missing. Having searched the house in an increasing panic she came to town in a full panic looking for help. If that is not enough, then comes word that an incarcerated prisoner known for kidnapping has escaped custody and could be in the area. Are the two situations linked? Does he have Sybil? Or is something else going on?

At about the same time as her Mom has her hands fill with her job, Auri has her hands full with her own issues at school. Being the daughter of the newly elected sheriff on top of being the new girl in school comes with a lot of pressure. A number of her fellow classmates are being less than welcoming. Three or four are being downright hostile as they take a page of the mean girls playbook. Her first day is turning into a real doozy and just like her Mom’s situation, thiings are only going to escalate. 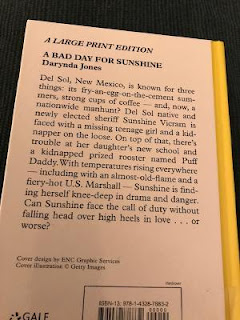 A Bad Day for Sunshine: A Novel by Darynda Jones is a really good book. It reminds this reader of J. A. Janice’s Sheriff Joanna Brady series with considerably more humor and a tad more romantic intrigue. It shifts at the start of each chapter as well as occasionally in a chapter between Sunshine and Auri as they deal with various events and situations. The backstory, told through memories and dialogue discussions, is very complicated and applies to both Auri and Sunshine.

At its heart, it is still a police procedural in many ways and that fact is not sidelined by the backstory, the personal dramas, and potential romantic entanglements. Plenty is at work in A Bad Day For Sunshine: A Novel is a fun and fast read that lays an excellent foundation for the series. A Good Day for Chardonnay is currently scheduled to be released in late July 2021.

A Bad Day for Sunshine: A Novel by Darynda Jones is strongly recommended.

A Bad Day For Sunshine: A Novel