Barry is back on the blog today with a selection that resonates with the current political situation as he reviews Fields for President by W. C. Fields. 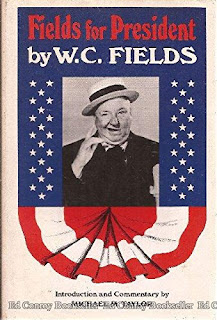 I was most likely in my mid to late teens when I first saw a W.C. Fields movie and instantly became a fan. A former vaudevillian, Fields’s comedic style was both physical and verbal like the Marx Brothers’, whom I’m also crazy about, but nonetheless dissimilar and unique. When I recently discovered that Fields had written a spoof about seeking the presidency of the United States, and that it’s available in e-book form, I bought and downloaded a copy.

This fast slender read, which includes illustrations by O. Soglow, opens with a laudatory introduction by Dick Cavett, who is also a die-hard Fields fan. Then we get into Fields’s own text, some of which is very relevant to what’s actually going on in the (as of this writing) lead-up to the 2016 presidential election, and in which anyone familiar with his films and the kinds of characters he portrayed will be able to hear his distinctive proclamatory intonations. As he tells us, “The purpose of this modest little volume is to make clear to my future constituents what my moral and political background has been, and exactly how I stand on the issues of the day. So just pull up a fireside and lend an ear to your old Uncle Will, the white hope of the Bull Moose Party in 1940.”

Why is he running for President? It dates back to when “I was exactly nine years old, and I can remember clearly how Boss Tweed’s brother, Harris Tweed, took me on his knee and said: …‘Never give a sucker an even break.’”

Discerning readers won’t fail to notice significant similarities between Fields’s manner of delivering self-aggrandizing assertions and those of real-world candidates, in particular an orange-hued, oddly-maned chap from New York. This is not to say that Fields was trying to be prophetic, but that because everyone running for office bloviates about his or her qualifications and an opponent’s lack of same, in this case one need only examine the chapters’ substance to recognize Fields’s inadvertent satirical clairvoyance. 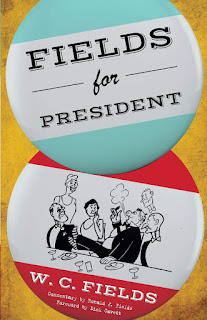 CHAPTER I: LET’S LOOK AT THE RECORD

“Business Success: If he knows nothing else, a President should at least understand the secret of success in the business world. For, after all, what is the Presidency but a glorified business—or, at least, a fine racket?”

CHAPTER II: MY VIEWS ON MARRIAGE

“Right at the outset, friends…I wish to state unbiasedly and without reservations that most marriage problems of today stem from the fact that we pamper our gentle sex too much…Never try to impress a woman! Because if you do she’ll expect you to keep up to the standard for the rest of your life.” Next we are treated to the anecdote of Fields’s effort at impressing a woman named Abigail Twirlbaffing with his skill as a bugler.

CHAPTER III: HOW TO BEAT THE FEDERAL INCOME TAX—AND WHAT TO SEE AND DO AT ALCATRAZ.

The pungency of the chapter’s title cannot be lost on anyone even vaguely aware of one of the controversies in the current campaign. Fields points out that many people are daunted “by the intricacies of wrestling with an income-tax blank. Forsooth, there are some citizens who feel so cowed by this imposing document that they ignore it altogether. I number at least one such person among my acquaintances (I say ‘number’ because that is what he is now—at Alcatraz)….”

“Campaign resolutions are nothing more than overgrown New Year’s resolutions: they are thrown together hastily at the last minute, with never a thought as to how they may be gracefully broken.” Thus the candidate goes on to aver how he’ll make and break his sworn campaign promises.

CHAPTER V: MY RULES OF ETIQUETTE

Here I’ll leave readers to consider the episodes concerning Claude or Claudette, a trained seal; and the lone customer standing outside a theater on a wintry night in Upper Waukegan.

CHAPTER VI: HOW I HAVE BUILT MYSELF INTO A PHYSICAL MARVEL

“Although the demands on the Presidential physique have gradually been reduced to buttonpushing (sic)…still it is imperative to have a man in the White House who is as sound in body as he is in mind.

“…I was not always the remarkable specimen I am today. In my youth I was distinctly frail. I well remember that many a time I could not even crush the can for Daddy in a proper manner. The two-quart container of beer was often more than a match for my slender young arm, and I would be forced to drink half the contents to make the burden lighter.” 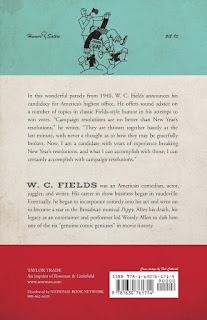 CHAPTER VII: THE CARE OF BABIES

Does this boast remind you of a certain current candidate? “I do not hesitate to state that I, W.C. Fields, possess a deeper understanding of babies and their problems than any other statesman in America…

“…To give you an example of my comprehension of infant psychology, on my last swing around the corn-belt states, I always carried a number of sterilized blindfolds, which I would casually place over each baby’s eyes before I kissed it. This prevented its growth from being stunted through terror.

“It was more than any other candidate was willing to do for American babyhood and, believe me, the parents of the nation appreciated my thoughtfulness.”

CHAPTER VIII: HOW TO SUCCEED IN BUSINESS

“Ask any expert and he will tell you that business suffers from two distinct ailments:

“Well, the solution ought to be plain to anyone. There are 50,000,000 workers and 10,000,000 unemployed. Merely remove all taxation from business and stipulate that employers must spend this great saving in hiring pickets—one picket for every five workers they employ. Presto, no more taxes, no more unemployed, no more labor unrest—everybody happy!

This has been a lengthy overview of a very short book, one you can whip through in two or three hours as I did, grinning my way through it and, on several occasions, laughing out loud till my eyes watered. It’s too bad W.C. Fields isn’t alive today to observe what’s going on—and perhaps to declare his candidacy for real, if only to mischievously stir the pot. If he’s aware of what’s going on, he’s probably juggling in his grave.

We’re presently dealing with the campaigns of the two most disliked presidential candidates in the history of our country. If you need a humorous break from the agonies of watching and reading about them, I can’t recommend Fields for President strongly enough.

Reviewer’s Note: to those reading this who have never seen W.C. Fields, and to those who are familiar with him and are feeling nostalgic, YouTube  has a fair number of clips as well as some films you can see—and should—in their entirety.

“Don’t be a luddy-duddy! Don’t be a moon-calf! Don’t be a jabber-now! You’re not one of those, are you?” Find and read some of Barry Ergang’s work at Smashwords and Amazon.