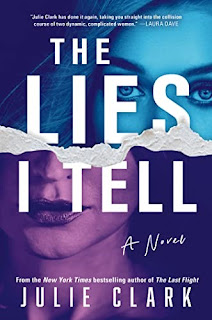 I love a good con artist tale and The Lies I Tell by Julie Clark (Sourcebooks Landmark, June 2022) hits the mark. This brand-new thriller is about a skilled grifter and the collateral damage of one her scams. Kat Roberts was an up-and-coming young journalist when she encountered Meg Williams for the first time. Because of a story lead that Meg planted as part of a sting, Kat lost her job and struggled for years to regain her footing both in her career and in her personal life.

Bent on revenge, Kat began tracking Meg who is a chameleon. She changes her name and her persona effortlessly as she travels around the country, becoming a brand-new character to fit whatever con she is working. She’s a life coach to the stars, she’s a well-known interior designer, she’s a naïve community college student, and she’s a high-powered realtor.

Kat felt sure that eventually Meg would return to Los Angeles, and after 10 years, she did. Kat maneuvered her way into Meg’s orbit and tries to get Meg to give up her secrets. Meg holds her at arm’s length while focusing on the real reason she came back to Los Angeles. Their interplay creates the primary tension of the story, which builds as Meg narrows in on her current target and Kat becomes obsessed.

The story is told alternately in Meg’s voice and in Kat’s, revealing the motivations of each and their reactions to the other’s attempted manipulation. Along the way the reader gets an excellent tutorial in how to set up a mark and execute a scam. It’s a quick compelling read with a number of surprises and insights into human behavior. Highly recommended.