Those who know Dave Zeltserman's writing, either through the now closed and very much missed Hardluck Stories e-zine (shut down due to Dave's increasing success as a novelist with Pariah due out in October and Killer out next January among other projects and a movie deal) or his novel work, know that Dave Zeltserman looks at things from a dark point of view. That certainly is the case here in Small Crimes. 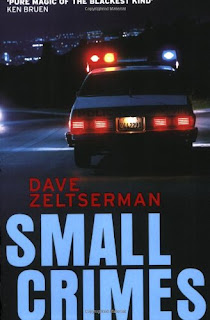 Former cop Joe Denton has spent the last seven years of his life in the county jail for a crime he most certainly did commit. Sentenced to sixteen to twenty-four years for arson, attempted murder, and maiming a district attorney strings were pulled to keep him at the local county jail. Released, Joe Denton will return home to Bradley, Vermont. He has lost his wife and daughters, a twelve year career in law enforcement, and has very limited prospects. Nobody in the area, including his parents whom he will be staying with at the start of his parole, wants him around.


Certainly not the maimed district attorney whose face was stabbed 13 times by Joe in an attack that has left Phil Coakley virtually unrecognizable as human. Dan Pleasant, Sheriff of Bradley County, doesn't want Joe around either because Joe could lead investigators to Dan's own corruption. Then there is Manny Vessey and his son who are the local mafia crime bosses and they don't want Joe around. While everyone involved, except for Phil, is graceful Joe kept his mouth shut during his incarceration, they don't trust him to continue to do so and his being around serves as a constant reminder of the past and those secrets.


Before he leaves town, and everyone has made it clear to him that he should, Sheriff Dan Pleasant wants Joe to complete one final job. Manny is dying in a local hospital because of terminal cancer. Phil Coakley visits every single day using the bible and salvation as leverage in a hope to get Manny to confess to all he knows. Manny isn't the hard edged man he once was and facing death closing in on him just might start talking. That could send everyone around, including Joe, to prison and worse. So, Sheriff Pleasant wants either Manny killed or Joe can finish the job on Phil and put him out of his misery. Killing either one solves the problem as the Sheriff is concerned and he doesn't care which one dies. 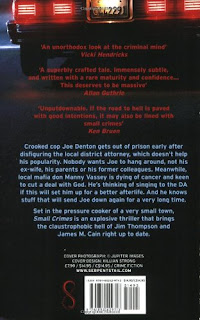 Joe cares and figures there has to be a way of solving the issue without doing more damage let alone killing anyone. Joe came out promising to keep to the straight and narrow for himself as well as an attempt to correct the past as best he could and get his family back. But, Sheriff Pleasant isn't the only one putting pressure on Joe Denton to go back on his plans and do what needs to be done by any means necessary. The problems rain down upon him and the pressure mounts as Joe fights to make things finally right.


As in Fast Lane and Bad Thoughts Dave Zeltserman takes a flawed narrator who could be anyone and puts him in an everyday situation that could fit most people. Then, he ratchets up the pressure on all involved. Like the author's other novels, this novel is primarily a character study of one man, who isn't totally aware of himself and his actions, coping as best as he can against a myriad of forces stacked against him. The question to the end is whether or not he can save anyone- including himself.


Those looking for cartoonish violence with plenty of rapid fire car chases and the like will be disappointed in this read. Those who prefer their books to be realistic and more cerebral will find much to like in a book that inevitably will draw comparisons with works written by other authors. And while those points of reference may be there along with other things that are subject to reader interpretation including the ending, there is no doubt that Dave Zeltserman has crafted a noir mystery thriller that pulls readers deep into a violent claustrophobic world while providing one heck of a good read.