Reviewing: "The Adventures of Quinn Higgins Boy Detective—The Case of Bigfoot on the Loose" by Douglas Quinn

When I was young years and years ago, I spent quite a lot of time with the Encyclopedia Brown Detective Series. For those not familiar with the concept, it revolved around a young boy who would use his detective kit and other skills to solve cases in his local area. While some swore by the Hardy Boys, I always did prefer Encyclopedia Brown. This series seems reminiscent of those books and is almost as good. 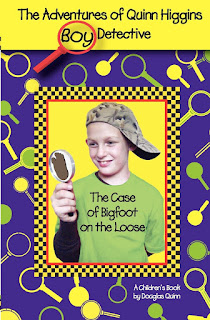 This second in the series find the boy detective, Quinn Higgins traveling to his father's cabin near the Oregon National Forest. During the year Quinn lives with his mom, but during the summer he comes to Oregon. In September he will be going to the fourth grade, but right now as the book opens, he has three weeks with his dad in Oregon.

Quinn can't wait to see his friend Charlotte “Little Dove” Evans whom he has not seen since his last trip. That has to wait while he eats, sleeps, and recovers from the jet along and long drive to get his Dad's cabin.

Quinn likes to read as does his dad and before long Quinn gets very interested in a book about Bigfoot. In between drinking soy milk at meals, camping out with the Little Dove, and doing other things, Quinn and Little Dove investigate the legend and history of Big Foot and how the creature may relate to current events in the surrounding forest.

That investigation leads to two concerns for parents in this otherwise very enjoyable book. Little Dove and Quinn find a stranger living comfortably in a fort (more like a lean-to) that the children made the previous summer. Not only do they pass time in the fort with the stranger, they take food and drink he offers and consume it with no thought at all about strangers and the perils they pose for children. This happens despite the fact that clearly the children should know better. The whole concept of “stranger-danger” is totally ignored throughout this section of the book.

After giving the kids food and drink, the stranger who identifies himself as “White Moon” and is from a different tribe than Little Dove, eventually leads then far deeper into the woods than Quinn's father said they could go in pursuit of Big Foot. Not only do the children, primarily Quinn, rationalize this act of disobedience, they also decide not to tell their parents about the stranger or anything they did. Considering their ages and the risks they took that goes beyond what is noted above and includes a confrontation with a bear, not telling the parents might be best for the characters, but raises huge issues for real life parents. Issues that parents may wish to discuss with their own children if they are to read this book.

Otherwise this self-published book through CreateSpace (part of Amazon) under the “White Heron Press” moniker is a good one. At eighty six pages of actual text (not counting ads for books at the back) it is an enjoyable book featuring a kid fairly confident in his abilities and interested in the real world around him. While parents may have a concern over the lack of stranger danger awareness in the book along with its occasional lecturing tone primarily regarding television and the environment, they will surely appreciate the passion expressed for reading and knowledge. Two things any parent, myself included, would like to instill in his or her children.


Material supplied by publicist Donna Higgins Colson in exchange for my objective review.