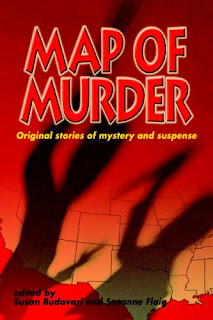 Originally published in early 2007, this anthology show cases murder at various locations across the country. Edited by Susan Budavari and Suzanne Flaig, each story is complex and interesting as the involved authors took the mission concept in different ways. Of course, it really isn’t possible to go into any depth about any of the stories without ruining the story for the reader. Suffice it to say, there isn’t a bad one in the bunch and each weaves its own spell upon the reader. With 20 stories involved, hopefully the ones I have chosen below will reflect accurately the scope and breadth of this engrossing anthology.

In Robert L. Iles’ story “Fast Eddie”, Eddie has a plan. Help the young female traveler store her luggage at the Vegas bus terminal and then lift it from the storage locker later. He’s a small hustler and thief who get far more than he thought when he grabbed the suitcase.

We have all had those days where one bad thing happens after another so has a Vegas show girl named “Stella” in “An Off Day” by S. J. Smith. You will get a kick out of this one.

Frank Zafiro brings the border country near El Paso a live “In the Shadow of El Paso.” A beautiful bartender causes problems and pulls a lawman along a journey of love, hate, desperation and despair. This is a powerful story and one that packs quite a punch.

Another favorite, and not just because it is set on the Texas Gulf Coast, is Carole Kilgore’s “Bunuelos for the Beach.” Pete is dead, Gina is heartbroken at the death of her friend and Detective Cantu is on the case.

Heading east and north and a few stories later, readers find themselves deep in the Smoky Mountains in Deborah J. Ledford’s “Smoky Mountain Inquest”. The middle of the night makes for the best time to detect and it is a salvation for Edgar Marconi working a case in the Swain County Sheriff’s Department substation. Heavily atmospheric with a complex character I would like to see more of, this is an excellent inclusion.

No one really wants to find a body. Especially, early in the morning, which is what happens to Sarah in “Death at the Dumpster” by Suzanne Flaig. Good thing a cop is close to help her as the cop is married to her best friend, Marie. Too bad she quickly becomes a suspect.

Beth Groundwater weaves a twisting tale up into the Colorado Mountains in her tale “The Murder Cache.” When you are a good parent, there isn’t anything you won’t do for your child.

Having read and enjoyed Simon Wood’s work before, I was pleased to note his inclusion in this anthology. His story “Prove It” is well worth it and involves a con having to prove what he did on the outside to stay alive in San Quentin.


Material provided by the publisher in exchange for my objective review.