The world is filled with tomorrows and none are worth a damn, at least for me.  Tomorrow has some bit of hope attached. Things will be better tomorrow. I’ll have a decent job and a good solid wife.  Tomorrow I’ll have my health back or a brand new baby boy or a string of ponies.   (“Desert Reckoning”, Trey R. Barker, page 81)

The anthology “On Dangerous Ground: Stories of Western Noir” is filled with 21 stories by 21 very talented authors. The book is almost evenly split between tales previously published online at Editor Dave Zeltserman’s “Hardluck Stories” website (still missed by many readers including this reviewer) and new original fiction. While the story setting is occasionally not out West somewhere, the women are almost always trouble and the men are almost always, at least somewhat, fatally flawed in these often complex tales.  Death of the soul can and often does happen long before the characters die of stretched necks or lead poisoning. The phrase “dead man walking” frequently comes to mind throughout this very well done 294 page book. 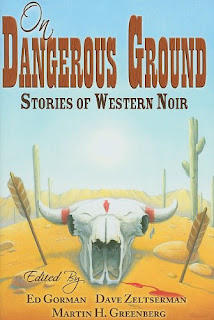 After a two page introduction to the book by James Sallis, Bentley Little’s story “Hell” kicks off the book setting the tone for what is to follow. Perris is a ranger and on the trail of Tim Curtis whom he has been chasing on and off for the last six years. He plans on finally catching him and bringing him back to Texas so that he can answer for what he done. If taking him alive does not work, he can always mete out justice once he finally catches up to the outlaw.

Of course, the pursuit of justice and obtaining is the theme of any Western on some level. It certainly is true here in nearly every story in the anthology. It certainly is true without question in “All Good Men” by Terry Tanner. Even behind bars in Yuma Penitentiary, scores have to be settled. It will just take time. But, time and his plans is all the narrator has anyway as he is not going anywhere anytime soon.

Lucas Harte can’t demy who he is when confronted in “Burl Lockhart’s In Town” by Steve Hockensmith. Gunther Tietzmann knows Lucas way too well to be fooled by Harte’s denials even if it has been more than fifteen years since they last saw each other. The Pinkerton man, Burl Lockhart, is in town and Tietzmann thinks he is on Harte’s trail. Bad news indeed.

God works in mysterious ways in “Canticle” by Desmond Barry. Being a Mormon with several wives and numerous children, Caleb Dunne is not wanted around by the good people of the state of Colorado.  That is until they need him to hunt down a murderer. Not that a murderer is his real priority as Caleb Dunne has other things on his mind.

“Colt” by Ken Bruen creates a problem from the first line of this story as the narrator’s gun jammed when he needed it most. If he had just gone on by the town of Watersprings things would have been different. But, he didn’t. Now the damn gun has jammed for the first time ever.

Bill Crider comes next with his tale of loss and survival in 1880 near Fort Laramie. No matter what Bill Crider writes, one knows the story will be good. That certainly is the case here. Nobody pays any attention to the “Piano Man” in The Bad Dog Saloon. When they do, he will really wish they hadn’t.

A West Texas graveyard is very important in “Desert Reckoning” by Trey R. Barker.  Familial obligations, especially between brothers, mean so much in this tale of loss and family justice.

Harry Shannon weaves a tale of deceit and suspense in “Lucky.” You know Joe Case is in trouble from the first line of the story. You just have no idea how bad.

It is always a pleasure to read something from Jan Christensen. Such is the case here with her intriguing story, “Going Where the Wind Blows” featuring a woman down on her luck and doing what she has to do to survive in San Francisco. Bill Reynolds and Rita Mae Wilson had a plan when they got there. But, Bill got killed and Rita Mae is trying to survive in a world where others know much more about her and her checkered past than she does about them. Secrets abound aplenty in this complex tale.

Secrets are also quite plentiful in “The Old Ways” by the very prolific and talented Ed Gorman.  In this case, a gambler accepts an offer of employment at Madam Dupree’s in San Francisco, but that does not solve his problems. 1903 is not a very good year in so many ways for these folks.

Woody Granger is a sixteen year old orphan working and living where he can while he drifts across Tennessee “In Some Countries” by Terry Raine. These days find him bunking and working for Harold Cutter and his family. It is a sheep ranch and Harold does not tolerate mistakes or stupidity well. Teenagers come with both in this story that features one heck of a twist at the end.

The power of cartoons for good or evil is at the heart of “The Cartoonist (A Western Melodrama in Five Scenes)” by Jon L. Breen. Terrence Webb is a cartoonist and a good one. He is especially good with pointed satirical cartoons that comment about various area residents. If the cartoons run in the local paper, there could be major repercussions.

Durston isn’t sure whether the dead man that haunts him is real or not in “Durston” by Norman Partridge. At one time Pitch Dunnigan was his partner in crime. Neither in the reader in this guilt ridden tale. There has to be a solution and Durston is going to find it.

If you have read much of Dave Zeltserman’s work, you know the temptations of a woman play a frequent role in his stories regardless of genre. That idea, along with another frequent theme of his, that the hero is subject to the whim of a predetermined fate, is both present in his story “Emma Sue.” Emma Sue and Bo Wilson got married a few years ago and recent years have not been kind. But, Emma Sue has a plan for how to make some real money.

Lucian Danvers is on the back trails of the New Mexico Territory in a brutal July when he stops to try and find his horse some water. He didn’t see anybody but that does not men somebody wasn’t watching HIM in “Hell Hath No Fury” by T. L. Wolf. The loud cocking of the gun means he isn’t alone and things are about to go downhill in a hurry.

Vanity, Arizona with a population of 159 souls does not look like much to Kel McKyer when he rides into town. He isn’t the only person looking for a bed and maybe something more in “Vanity” by Jeremiah Healy.

Robert J. Randisi contributes his own very good story, “Cowards Die Many Times.”  Val O’Farrell used to be a homicide cop. These days he gambles. He is also a survivor since he was called away from a poker game where everybody else was killed minutes after O’Farrel left.  Now O’Farrel wants to know why he was spared. He isn’t the only one who wants to know in this story set in New York in 1921 featuring historical figures.

It was supposed to be a simple bank robbery in “Lead Poisoning” by Gary Lovisi. Two dead in the bank and now Johnny Blood is caught waiting outside nearby with the horses. Johnny knows here are no other options but to surrender. Too bad Sheriff Hardison won’t accept a simple surrender.

A frequent theme in the book is what is happening to or with the Indian population in the time period of a given story. Such is the case here with “The Conversion of Carne Muerto” by James Reasoner. Acts, good and bad, can have very grave consequence. Somebody really should have listened to Captain John S. “Rip” Ford. Experienced Texas Rangers knew a thing or two about dealing with the Comanches and folks new to Fort McIntosh, near Laredo, Texas should have listened.

Their father wasn’t the same when he came home from serving in the Union Army. Having gone west from Philadelphia, things were supposed to get better in the “Last Song of Antietam” by Patrick J. Lambe when they found a new place to make a homestead. Music and religion is what keeps the family together during unspeakable hardship. That may not be enough.

As noted earlier, a violent and crime riddled San Francisco is the setting for several of the stories in this book. That is the situation here in “Through The Golden Gate”  by Terence Butler. Having not gotten much by way of his latest mugging, Dirty Tommy is receptive to Lilyanne’s latest get rich scheme. She maybe a whore and a drunkard, but she did have her benefits outside the bedroom.

A multipage author biography and a two page copyright notice page covering the works bring this 294 page book of enjoyable stories to a close.

While the language is only occasionally coarse, the stories themselves are always hard hitting and cover the spectrum. The tales deal with diverse topics such as the spread of civilization westward, the plight of the Indian population, the changing society, the aftermath of the civil war and its impact, among other themes, but all boil down to universal basic situations. The women are almost always trouble and the men who try to save them are almost always fatally flawed in some way.  In many cases, the living men are dead in spirit. Consciously or subconsciously, the men are looking for that one final act where they can die trying to redeem themselves or confirm their own internal assumptions. Occasionally, they succeed.

That same spirit is present today in so many ways. The West may be conquered in a sense because the wild spaces are few, but the general spirit of desperation for a better life that drove people across the West lives on. It may be brought on more by the present economic climate, but it is always there in some form or another. As Bat Masterson put it long ago right before he died at his typewriter:

There are those who argue that everything breaks even in this old dump of a world of ours. I suppose those ginks who argue that way hold that because the rich man gets ice in the summer and the poor man gets it in the winter things are breaking even for both.  Maybe so, but I’ll swear I can’t see it that way.”  (Authors note, “Cowards Die Many Times,” Robert J. Randisi, page 240)

Material supplied by editor Dave Zeltserman for my objective review.

Great review Kevin covering eqch story individually takes a lot of time and attention I will get this collection.

It is a good one, Linda. Hope you like it too.