FFB Review: "Murder to Mil-Spec: A Crime Fiction Anthology to Benefit Homes For Our Troops" edited by Tony Burton

It is Friday and that means it is time for Friday’s Forgotten Books hosted by Patti Abbott.  It is also Veterans Day. Therefore, in honor of Veterans Day, I selected the Murder to Mil-Spec anthology released last year by Wolfmont Publishing. Proceeds from the sales of this anthology will be donated to "Homes For Our Troops" charity found at  http://www.homesforourtroops.org/site/PageServer to assist returning military personnel with their needs.
Not just on Veterans Day, but every single day---Thank you to the men and women who have served as well as those who are currently serving the nation. 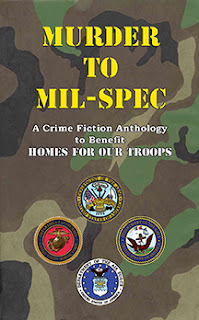 Wolfmont Publishing has a history of publishing a holiday anthology to benefit a charity group. Last year’s holiday anthology titled, Murder to Mil-Spec, provided another good read of strong stories. As in other holiday anthologies published by Wolfmont Press, crime is at center stage. Unlike previous anthologies that restricted events to the holiday season, this time the stories can happen anytime and anywhere. The pursuit of justice is a frequent theme in these stories and can take many forms. Sometimes righting a wrong happens fairly swiftly while in other cases it may take years, even decades, for justice to finally be served.

After a brief forward by editor and publisher, Tony Burton, the anthology begins with "Meet Me by the Priest" by Terrie Farley Moran. The allies are on the outskirts of Berlin, Germany and Corporal Billy is back home in New York for a month leave. The habits of an old friend are going to get Corporal Billy into real trouble if he isn't very careful.

World War Two is also relevant in "Dart Champ" written by Dorothy B. Francis. In a departure from her very good `Key West Mystery' series ("Killer In Control" comes out next June) Agnes Brown is on a mission to recover her very important ring. The ring, made to replicate her hard earned bronze star, is a family heirloom she wants back and Agnes is not about to wait for the local police to solve the case.

Lt. Rongo Layton should have died one way or another during the Korean War for the sins he committed. He didn't. Instead, he came home in one piece and continued to sin. Clooney plans to rectify that in "Tripwire" written by Big Jim Williams.

Elizabeth Zelvin is making quite a name for herself in crime/mystery fiction with her novels "Death Will Get You Sober" and "Death Will Help You Leave Him" along with numerous short story credits in anthologies and magazines. Her story "Choices" is proof that sometimes it is a good thing when the woman walks into your particular gin mill.

The only story to use the current war in Afghanistan as a backdrop is the "The Gift of Life" by Lina Zeldovich. A very moving story that is as much about the clash of cultures as it is about the core of humanity which links us all together.

It is back to World War Two with the next story, "Justice at Sea" by Charles Schaeffer. Aboard the USS Flagstaff there is a killer on board. While many don't care, Johnny Shepherd intends to find out who murdered the Japanese prisoner of war.

It wasn't a murder but a rape that drives events forward in "Tourada A Corda" written by Howard B. Carron. Set in Terceira, Azores, the story features a case where a local girl has been assaulted. Since she is a friend of the family, the narrator intends to find out who did it and provide some justice.

Brendan Dubois comes next with the tale "One More Mission." Back in the day, McIntosh Air Force Base was part of the Strategic Air Command and provided security for the nation and its people. Now days, the place is now McIntosh International Tradeport and nearly everything John Regan remembers is long gone. But, there is still a debt and it has to be repaid.

An airport is also part of the next story. When the airport is closed, the murder suspects are few in "Danger From Within" by Janis Patterson. Fans of the "locked room" type of mysteries will surely enjoy this very good tale where the suspects are few and motivated.

Pranks are a part of most annual games between strong rivals. Occasionally they go wrong. Not usually as wrong as it did here before the Army/Navy game in 1972. "An Officer and a Gentleman's Agreement" written by Barb Goffman shows the wait to right a wrong can be very long indeed.

They may be retired sitting on park benches but senior citizens Joe and Benny know something is off in "Warriors Know Their Duty" written by S. M. Harding. Will anyone listen and take them seriously?

Iraq finally makes an appearance at the end of the anthology with "Salome's Gift" by Dianna Catt. Salome's big brother is fighting in Iraq and, while the news about his status is not good, his package home to her is very special. If only she can find the courage to open it.

The anthology closes with six pages of detailed author bios that include numerous titles of short stories and novels for yet more reading pleasure from these talented authors.

Unlike previous holiday anthologies from Wolfmont Press, these stories are not humorous and there is hardly a humorous line around in any of these very good tales. Instead, the tone of the anthology as a whole is somber. Respect for those who served honorably is present as is disdain for those who did not. Often the point of the story is to serve justice out to those who would be served in an effort to finally address events that happened long before. As such, flashbacks are present in most stories along with brief history lessons.

Murder To Mil-Spec is a good read featuring a lot of strong stories supporting a good cause. Thanks to medical advances military personnel are now surviving catastrophic injuries and come home to discover their homes need major modifications. Proceeds from the sales of this anthology will be donated to "Homes For Our Troops" charity found at http://www.homesforourtroops.org/site/PageServer to assist returning military personnel with their needs.

Not only can you enjoy a really good book, but you can also help the men and women who need our help to fully come home.
Murder to Mil-Spec: A Crime Fiction Anthology to Benefit Homes For Our Troops
Tony Burton, Editor
Wolfmont Press
http://www.wolfmont.com
October 2010
ISBN#978-1-60364-028-2
Trade Paperback (also available on the Kindle)
224 Pages
$12.00

Material provide by editor/publisher Tony Burton in exchange for my objective review.