Although his primary office is in Washington, D.C., private detective Chester Drum has opened another one in Geneva, Switzerland because so many of his cases take him to Europe. When Drum Beat—Dominique opens, he's come to Paris at the request of his old friend and former colleague in the F.B.I., Jack Morley. Morley, whom Drum remembered as always immaculately dressed and who, after leaving the Bureau, once had a high-level position with the State Department, is now an unkempt drunk. He presently works for the Army, specifically the Graves Registration division of the Office of the Adjutant General. 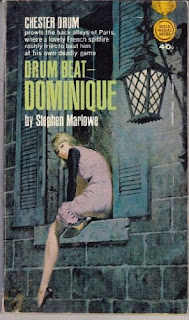 "You see," he explains, "the Army never shut its books on men missing in action during World War Two, even though it's been almost twenty years since old Adolf blew his brains out. Well, most of the MIA's have been accounted for to the satisfaction of the Department of the Army and the next-of-kins, and the whole mess of field investigators has been reduced to a team of three custodial ghouls who poke around Europe tracking down dead men and, as I said, I'm one of the ghouls."

He has summoned Drum to Paris to ask for help he can't afford to pay for. Senator Clay Bundy thinks Morley is blackmailing him. When Drum asks about what, Morley refuses to say, but it becomes clear that he has discovered something about Bundy that makes the man vulnerable to blackmail and, unless he's lying and guilty as charged, that someone else knows what Morley knows and is using his name to bleed the senator. From Morley's companion Jill Williams, Drum learns that a mysterious caller warned Morley he'll be killed if he doesn't cease trying to extort money from the senator. In spite of Morley's irritating unwillingness to provide relevant information, Drum agrees to talk to Bundy on his behalf—but as his friend, not as his employee.

The arrogant and imperious senator has been in Paris for a couple of weeks to attend a conference, and Drum finagles a meeting with him. Though Bundy is skeptical of Drum's assertion that Morley isn't a blackmailer, he knows from a fellow senator that Drum has a stellar reputation in Washington and agrees to hire him to find and stop whoever the blackmailer is. He won't reveal why he's being blackmailed, but he tells Drum he's already made two payments of ten thousand dollars each to a man named Père Massicot, who owns a stall in the Paris Flea Market.

Drum has barely begun his investigation when a key figure is murdered and he first encounters the lovely Dominique Guilbert, for whom he falls hard and who also accuses Morley of being a blackmailer; and tangles with her hotheaded, antagonistic brother, Gaston. Still another murder occurs, and Drum's pursuit of answers takes him to the village of Col de Larche in the French Alps. The only hotel in the village is owned by Dominique's parents, Nicole and Raoul, both of whose faces are marked with small white scars from the plastic surgery necessary to repair damage sustained from wounds incurred during World War II (Raoul fought with the Maquis, the French Resistance). Madame Guilbert also wears long white gloves to cover her arms.

As his investigation progresses, Drum must contend with a "beezniz girl" named Gina; an American named Amos Kidder, who claims to be the vacationing owner of a hardware store in Massachusetts; Rosales, who runs an illicit gambling operation that extends credit to clients and who resorts to extreme methods of collection when and if he must; and Dr. Charles Auber, whose relationship to Nicole Guilbert might be more than professional.

To find the answers and the identity of the murderer he seeks in a case that quickly becomes personal, Drum must uncover the truth about a twenty-year-old wartime event in Col de Larche.

I haven't read any of Stephen Marlowe's many novels and stories outside of the Chester Drum series, so I can't speak to those or the work he published under his birth name of Milton Lesser before he changed it legally to Stephen Marlowe, or to the novels published under the several pseudonyms he used. I can, however, assert that the Drum novels consistently deliver smartly-crafted, vividly-written stories with an excellent sense of place. When I started Drum Beat—Dominique, I was unsure of whether I'd read it previously. If I had, it would have been when it was first published or a few years after, which means I'd have been eighteen or in my early twenties. It wasn't until I reached a climactic scene that I was certain that this time around was a rereading. I'd call it a testament to Marlowe's skill that I remember that scene four decades or so later.

Formerly the Managing Editor of Futures Mystery Anthology Magazine and First Senior Editor of Mysterical-E, winner of the Short Mystery Fiction Society’s Derringer Award for the best flash fiction story of 2006, his written work has appeared in numerous publications, print and electronic. For links to material available online, and fiction available for e-readers, see Barry’s webpages. Remember, too, that he has books from his personal collection for sale at http://barryergangbooksforsale.yolasite.com/ He'll contribute 20% of the purchase price of the books to our fund, so please have a look at his lists.
Posted by Kevin R. Tipple at 7:19 AM

I spent a great deal of time in the Sixties reading Stephen Marlowe's Chester Drum books. Your review brings back a lot of memories.

Thank you, George. You might find this obituary of interest because it provides a lot of background about Marlowe: http://www.independent.co.uk/news/obituaries/stephen-marlowe-crime-and-thriller-writer-790902.html

I have read just two Marlowe books, both Chester Drum novels. Liked on better than the other, but can't even recall the titles now. The one I liked was about an American tourist and a bullfighter in Spain. It's probably time for me to try another one.

It's completely new to me, so I reckon I'll be checking this one out. Chester Drum's a great name, too. Thanks for the tip.