A Sandi Update--One Week After Chemo Round Three

A week ago today Sandi finished her third round of chemo. This one has hit her much harder and for far longer than the first two rounds. I’m sure some of what she is feeling is stress and clearly there is a lot of stress around here. I still have to be in court Monday as I wrote about yesterday, , my car is still dead in the lot, and we are very, very far short paying the rent--- let alone anything else.

But, I think the biggest culprit is the chemo. A good friend of ours at one of the local libraries warned me that the third round of chemo would brutalize Sandi. The friend had something similar and hadn’t been as sick as Sandi had been in the weeks leading up to the start of chemo. The theory was that the body recovers a bit after the first round and then not nearly so much after the second round. By the third round, the body has nothing left in reserve to recover or bounce back.  She equated it to jumping off a cliff without a parachute.

That seems to be the case here as since last Thursday afternoon Sandi has been in bed with the flu like symptoms caused by the chemo. Shakes, chills, and severe fatigue have been the biggest issues though nausea has reared its ugly head several times. So far today as we approach noon she is a little better. Hopefully the worst is over. 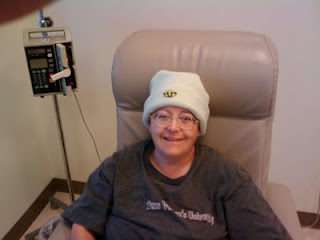 This picture was taken last Wednesday at Chemo as Sandi wore her new hat thanks to an online friend. The hat is actually a light green, but due to the overhead lighting, it appears white in the picture.
Posted by Kevin R. Tipple at 11:50 AM

One of the bad things about chemo is that the effects are cumulative, or at least they were for Judy. That's why each succeeding round is tougher. You have to hope that while it's having bad effects, it's also having good ones, and maybe it is.

I won't say I know what Sandi is going through. I did have a sister that went through it, a half sister that did, and an aunt that's just beginning treatment.

I've seen how it can affect one and can sympathize. We will keep Sandi in our prayers.

I have a friend that just did eighteen months of chemo. She is fine now a few months later. Hair back, energy back, rosy cheeks. I pray it's gone.

That is all we can hope, Bill. Indications are it is not and that is why the PET scan next week.

Thank you, Randy. I try to explain what is happening and I barely scratch the surface. I would not wish this on anyone.

18 months? I can't imagine that. But, if that is what it took and she could be in remission, I would be so grateful.....

Just thinking about you guys. Hoping for the best. Great pic of Sandi!