When you annoy the bosses once too many times and you work as a game warden for the State of Maine, you get sent to their version of Siberia. In this case, Warden Mike Bowditch has been sent to Washington County. The eastern most county in Maine is well known for poaching, drug abuse, high unemployment, and a host of other social ills. Not to mention the brutal winter working conditions. Bowditch is being punished and he knows it. Just about everything Bowditch has to deal with in his new assignment is made worse because his considerable reputation precedes him.

The biggest place in the county population wise is the county seat of Machias. The town barely has two thousand people. The small town, as well as the surrounding county, is a place where everyone knows everyone else, looks the other way, and pretends to know nothing. That includes ignoring the actions of a local drug dealer. A drug dealer that soon winds up dead with his friend severely injured by frost bite.

While others believe the friend killed the drug dealer during a snowstorm, Bowditch doesn’t think so. Any shred of credibility he had coming in was shot by his involvement in the case (never get romantically involved with a suspect is rule one no matter what agency you work for),  so he is forced to go it alone to get to the truth.  It isn’t the first time and won’t be the last. 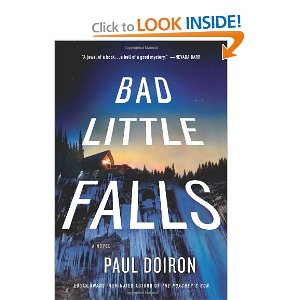 The series that began with The Poacher’s Son and continued with Trespasser just keeps getting better and better. This is a very complicated novel that continues to build on an excellent foundation while bringing further nuance and depth to the Bowditch character. Those efforts do not get in the way of the multiple storylines at work in this complex and multi-layered novel.  Bad Little Falls by Maine author Paul Doiron and well worth your time.

Material supplied by the good folks of the Plano, Texas Public Library System.