Review: "Buried By The Roan: An Allison Coil Mystery" by Mark Stevens

It is October and strange things are going on in the “Flat Tops” located in the Colorado mountains. A low flying ultralight plane is seen by hunting guide Allison Coil and others. On more than one occasion, Allison has felt like somebody was lurking in the woods and watching her. Considering the fact that after one such incident she found a baseball cap on the ground, and that same baseball cap was later taken from her horse, she is probably right that somebody is out there watching her and her hunting party. The same hunting party where one after another of the hunters becomes violently sick with some sort of gastrointestinal illness. 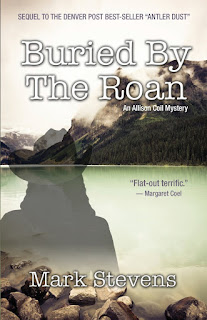 Even the makeup of the hunting party itself is strange as they are all experienced locals. They certainly don’t need a hunting guide as several of the group have spent a considerable time up in these mountains and don’t need help. The reasons she is given for their get together really don’t hang together, but they do have money and have paid for their trip. Neither Allison, or her romantic interest and assistant, Colin, can figure out the real purpose of their trip or why everything with the group dynamic is way off.  Not only is the hunting so far an epic failure, but everyone in the group seems angry at everyone else for things that have nothing to do with hunting. Then, a member of the group, Frank Keating, dies in what was just about the strangest way possible considering his experience.

Was it a freak accident or something more? Hunting guide Allison Coil tries to answer that question and many more in this strong sequel to Antler Dust.  Her search for answers will lead to many more questions in this complex and highly atmospheric tale set in the majestic Colorado mountains.

Buried By The Roan is primarily a psychological suspense story with occasional scenes of intense action as the tale shifts through various characters and situations. A secondary storyline of Allison’s good friend, Trudy, her possible romance and involvement in an ongoing environmental issue, frequently slows down the main storyline. Gradually, over the course of the book, the two storylines merge giving the reader multiple fight-for-survival situations regarding Allison during the last part of the book.

Overall, this sequel is a good solid read that one again brings to the forefront a serious and ongoing environmental threat in the Colorado mountains. At the same time, there is a very complex mystery that proves once again that some folks will do absolutely anything for money and they all don’t live and work in Washington, D.C. Allison Coil remains a strong and interesting character and one hopes, with such a solid foundation, she will be around for many more books to come.

Material supplied by the author a very long time ago in exchange for my objective review.

Sounds like a good one, Kevin. Mark's an excellent writer and I enjoyed ANTLER DUST. I look forward to reading this one,