Patrick is back today for a second appearance as part of  Friday’s Forgotten Books.   If you have not seen Patrick’s blog, At The Scene Of The Crime, you are missing a lot of good stuff.  Very much worth your time.... 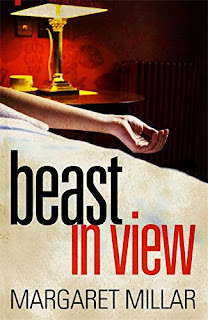 Helen Clarvoe is terrified. A girl named Evelyn Merrick has been harassing her and making veiled threats, all while carefully treading a legal line that ensures her victim can’t call the police and have something done about it. But soon, Evelyn decides to expand on her work instead of limiting her victim to Helen Clarvoe. She begins to terrorize everyone connected with Helen, starting with telephone calls and escalating into more and more vicious behaviour…

And so Helen turns to her lawyer, Paul Blackshear, who makes it his mission to track down Evelyn. But things aren’t quite as simple as that might sound. Half of the people who know Evelyn describe her as an insane girl who will destroy herself one of these days. The other half is shocked at the first half, and describe Evelyn as a saint who would do anything for a friend and whose kindness knows no limits. What is the secret behind the enigmatic Evelyn Merrick?

It’s the plot of Margaret Millar’s Beast in View, a 1955 novel that won the MWA’s Edgar Award for Best Novel in 1956. And you can tell why. This book is quite simply groundbreaking, but it has one of the most difficult endings to describe. The ending has since been extremely overused, especially by Hollywood. It has become one of the most cliché endings imaginable, and just one adjective can quite easily give it away (as it did for me). From page 1, I was convinced I knew the ending. So did that make the book less enjoyable?

Oddly enough… no! I was absolutely amazed at how Margaret Millar manages to pull off such an unconventional ending while playing perfectly fair with her readers. She never directly lies to us, you see. The only deceptions that are played out are those legitimately played out on the investigator, Paul Blackshear. And when the ending comes, you can really see why people back in 1956 were so astounded by it. It is one of Margaret Millar’s trickiest bits of misdirection, and even if you know the ending you can admire her for inventing the ending in the first place, and then for the clever misdirection with which people were fooled back when this twist was new.

And even though this twist now seems as old as the Great Wall of China, there is plenty of emotional resonance to the ending nonetheless, with an absolutely perfect last sentence that encapsulates the book’s beauty and tragedy. It really is a shame that, thanks to its overuse, this twist will likely not fool modern readers. I envy anybody who can read this book and be surprised by the ending.

But that’s not all. I was also genuinely shocked to see the topic of homosexuality discussed quite openly in the book. To be fair, the words “homosexual”, “gay”, and “lesbian” are never used (although the derogative term “fairy” is used once), but it’s quite clear that these things are going on. At one point, a lesbian makes a pass at another woman. Before she does so, another woman leaves the room sneering that she prefers the “normal ones”. The lesbian, Bella, runs an indecent abode, is overweight, ugly, and generally repulsive. She only appears for a handful of pages. Yet Margaret Millar manages to somehow turn her into a compelling character. Bella admits that the world has been cruel to her, and so to cope she began to eat, and eat, and eat, until she became the woman that we see in the present day. Although we see all the ugly things about Bella, this painful monologue shows that there is far more to her than meets the eye. There’s another homosexual character who is very important to the story, but describing this person and his backstory would give major spoilers for something that happens well into the book. (While Bella appears near the end of the book, her inclusion is only minor and I have used it to demonstrate just how talented Millar was at writing characters.)

All this proves yet again that gosh darn it all, Margaret Millar could write, and her work really has been unfairly forgotten. The characters in this story are among the most memorable you will come across in any novel ever written. The atmosphere of menace and dread in this story are absolutely top-notch, and it really tackles some risqué subject matter for the 1950s. The ending, although original at the time, has unfortunately become cliché since then through overuse, but that doesn’t take away from its emotional power. But even if you know the ending, like I did, you will undoubtedly find much to admire in Beast in View. This is another masterpiece from Margaret Millar and has reminded me once again why I love her stuff so much.

Note: Beast in View has been reissued by the Orion Publishing Group under their Phoenix imprint. More information can be found at the publisher’s page here. U. S. residents can easily order the book from The Book Depository here.

At 19 years of age, Patrick Ohl has already read the complete works of Agatha Christie and has almost done the same with John Dickson Carr. His taste in mysteries is very comprehensive, including the intellectual challenges of John Rhode, the psychological suspense of Margaret Millar, and the violent world of master thief Parker. He currently plans to write his autobiography, tentatively entitled I can’t stand postmodernism, and to sell millions of copies worldwide, gain international fame and influence, and use this to get some attention for criminally neglected authors such as this one. His reviews can be found on his blog, At the Scene of the Crime.

Great review Patrick - the book is a classic and milestone. I think I prefer HOW LIKE AN ANGEL of all her works, but it's a close-run thing. She was an exceptional talent.

Agreed, Sergio, Millar was indeed an exceptional talent. In an entry for The Canadian Encyclopedia, soon to be posted, I write that she was arguably the most talented English Canadian woman writer of her generation.