Friday means Friday’s Forgotten Books. Normally the list is over at Patti Abbott’s blog, but again this week, the list is over at Todd Mason’s Sweet Freedom Blog. If you have not been over there before, you really should poke around a bit after you read the below review from Barry.

LUCKY YOU by CARL HIASSEN 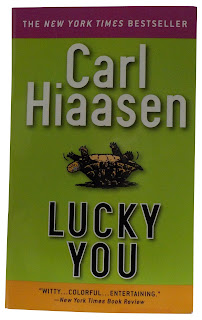 “Suspense” is one of those words that, in fiction, we probably take too much for granted as implying apprehension and associate purely with the sinister. We expect to experience suspense when reading a mystery, horror, science fiction or adventure story, but we forget that it can enter into even the homiest of tales--e.g., Jane Austen’s Pride and Prejudice, unlikely as it would seem one of the most suspenseful novels ever. Ultimately, any good story contains an element of suspense or we wouldn’t bother reading it to the end. “Suspense” equals “page-turner,” whether the author is Homer, Dante, Dostoevsky, Raymond Chandler or Stephen King.

Where does suspense enter into comedy? A joke is a perfect example. You listen intently, waiting for the punchline, sometimes anticipating it, sometimes only thinking you’ve anticipated it correctly. If the punchline delivers the goods, you laugh; if it doesn’t, you remain silent--or groan.

Can a mystery or crime novel be both funny and suspenseful? All you have to do to answer that is read one of Jonathan Latimer’s Bill Crane novels, or Craig Rice’s novels and stories about John J. Malone. Even John Dickson Carr (a.k.a. Carter Dickson), best-known for the eerie atmospheres that surrounded his “impossible crime” tales, occasionally injected some wacky humor into otherwise macabre proceedings. Donald E. Westlake, in God Save the Mark, The Hot Rock and many others, has shown that the criminous can be comical.

Which brings us to Carl Hiaasen, who may be as good as comedic suspense writers get, and his book Lucky You. It’s a page-turning good time that’ll have you smiling and occasionally laughing out loud. The only problem Hiaasen elicits is the conflict between wanting to devour his books in one or two sittings versus wanting to savor the hilarity over a period of days.

Lucky You starts when a young black woman, JoLayne Lucks, a veterinary assistant in the small town of Grange, Florida, learns that she’s won the state lottery to the tune of $28 million. With her winnings, she hopes to purchase a tract of land called Simmons Wood before developers do, to prevent it from being transformed into a shopping mall. What she doesn’t know is that there’s another winner, a white supremacist wannabe named Bodean Gazzer, who has enlisted the dubious assistance of the glue-sniffing, aerosol-huffing misfit Onus Dean Gillespie, who goes by the monicker Chub. Bodean intends to steal JoLayne’s ticket, $14 million not being enough to fund his newly founded organization, the White Clarion Aryans.

Tom Krome, formerly an investigative reporter for a New York paper that downsized its staff, and now working as a feature writer for a small Florida paper called The Register, is assigned to interview the reticent JoLayne. When she’s robbed, beaten and humiliated by Bodean and Chub, Krome decides to help her recover her ticket.

That’s how the book starts.

Deliciously complicating matters are various bizarre subplots and characters, among them Mary Andrea Finlay Krome, Tom’s wife, whom he’s been trying to divorce for years and who keeps eluding his attempts to do so; Katie Battenkill, with whom Tom has had a two-week affair; Judge Arthur Battenkill, Katie’s philandering but vindictive husband, who dispatches an inept assistant to burn Tom’s house down; Sinclair, Tom’s managing editor, who has a religious revelation in Grange and begins “speaking in tongues” after he holds a turtle whose shell is painted with the image of one of the Apostles--painted by Demencio, an entrepreneur who preys on the devotions of the ultra-religious by creating and perpetuating roadside miracles--among them a statue of the Virgin Mary that weeps perfume-scented tears; Dominick Amador, the incompetent builder who cashes in on the religious trade by drilling holes in his hands and feet to create “stigmata” Shiner, the convenience store clerk recruited by Bodean and Chub and assigned by Chub to kidnap the love of his life: Amber, the canny waitress at Hooters; and Bernard Squires, investment manager for the Central Midwest Brotherhood of Grouters, Spacklers and Drywallers International, sent to Grange by Richard “The Icepick” Tarbone, who is skimming the union’s pension fund, to purchase under any circumstances the same tract of land JoLayne wants to preserve.

Hiaasen, himself an investigative reporter for the Miami Herald (which makes one wonder what kinds of people he’s encountered in real-life, and whether some of them find their ways into his books), skillfully blends these characters and situations into a plausible sequence of comic and not-so-comic events in a way that will keep you turning the pages to find out what happens next. Like Swift, Twain and Thurber, all of whom he’s been compared to, Hiaasen has a satirical take on contemporary life; like Dickens, he has a knack for rendering outlandish characters so as to make them goofily believable. Even his villains, if hardly likable, are fascinating to watch.

If you haven’t read Hiaasen, whose previous novels--Tourist Season, Double Whammy, Skin Tight, Native Tongue, Strip Tease (the book is infinitely better than the movie!), and Stormy Weather--are all eminently worth your time, Lucky You is a wonderful place to start. If you have read him but haven’t gotten to this one as yet, you’re in for a laugh-peppered treat rich with subtle social commentary that never hinders the pace.

Still doubt that comedy can be suspenseful? Lucky you: you can dispel the doubts by reading Lucky You. 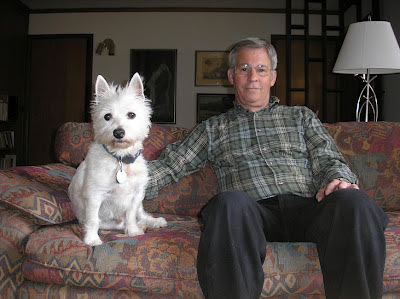 Barry Ergang ©2008, 2012
Winner of the Short Mystery Fiction Society’s 2007 Derringer Award in the Flash Fiction category, Barry Ergang’s written work has appeared in numerous publications, print and electronic. Some of Barry’s fiction is available at Smashwords and Amazon.com, and Amazon also has available a couple of his poetry collections. His personal collection of books for sale are at http://www.barryergangbooksforsale.yolasite.com/.

Thanks, Kevin. Hey, have you had much fun with Hiassen yourself?

Always glad to post Barry's reviews because he has read so many things I have not. Hiasen is one of those people I have not read.