Humor is a delicate thing and certainly that is true in mysteries. The author runs the risk of alienating readers in an attempt to be funny. Humor is subjective and those that swim happily in the politically correct ocean don't appreciate humor. I'm not one of those and if you still read my columns and reviews, I suspect you aren't one either. Neither is Texas author Ben Rehder and the book is funny as well as being very good. 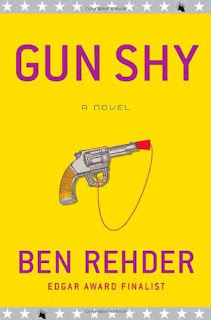 
John Marlin has been a game warden in Blanco County, Texas for more than twenty years. He has stories to tell about the amazingly stupid things he has seen folks do and the things they have said to him. Like the day when a woman who had just recently moved down from Dallas called to complain about the wild deer in her yard eating her plants. She thought that if the deer crossing sign was removed from the street in front of her house the deer wouldn't show up in her yard anymore.

So when Ken Bell who has been around since just after World War II calls, he isn't too worried. That is until Ken explains that in an effort to run off the latest poacher on his land he left fly with some birdshot. Except his shotgun was loaded instead with buckshot and the man fell over and isn't moving. Ken is afraid to go take a look and thinks the man is dead. John Marlin quickly confirms that the young Hispanic man is dead. But, he wasn't killed by Ken Bell.

He's been dead for a couple of days and the scene was staged to make it look like a hunting accident. Ironic as in just a few days the National Weapons Alliance is set to rally in support of the right to carry guns for every American at the nearby ranch of current country and western superstar Mitch Campbell. A man that seems to have more in common with the late Elvis than anyone else and is a rolling freight train of disaster.

What follows is a cozy style mystery read packed with multiple secondary storylines, numerous characters, and plenty of pointed humor directed at both sides of the gun debate as well as other targets. Author Ben Rehder pulls no punches and by the end of the book, it isn't clear which side received more plates of heaping scorn. Along the way, he takes shots at the media, misguided celebrity worship, modern day marketing of music, and numerous other groups and individuals. It becomes tempting to try to link various characters and groups with their real life counterparts as often the fictional veil is very thin indeed.

However, the book is fiction and as such, the read is often laugh out loud funny. While the main storyline of the original killing involving game warden John Marlin is obvious, almost nothing else is which serves the overall purpose for keeping the reader interested and entertained. The result is a funny, occasionally coarse read, that works on every level and does so without the author drawing attention to himself.

More reviews for Friday's Forgotten Books can be found over at Patti’s blog.
Posted by Kevin R. Tipple at 2:00 AM