Friday means Friday’s Forgotten Books hosted by Patti Abbott. She took the week off, but we still roll here because we are guys and that is just the way we are. Please welcome back Barry Ergang who shares his thoughts regarding this classic from Ed McBain.

City councilman Lester Henderson and his staff are setting up in Martin Luther King Memorial Hall for a rally during which Henderson will announce that he's running for mayor. While Henderson is practicing a walk across the stage to a podium, multiple shots explode from somewhere in the building and he falls dead. Because the Hall is in the Eighty-Eighth Precinct, the foul-mouthed, obese, gluttonous bigot Oliver Wendell Weeks is the detective assigned to the case. Because the victim lived in the Eighty-Seventh Precinct, Ollie requests help from that quarter, and Detectives Steve Carella and Bert Kling are stuck with the task of working under his direction.

As excited as he is to be working his first high-profile case in a long time, Ollie is equally excited about his novel entitled Report to the Commissioner, which was written (on a typewriter) in the form of an official report. He has written it using the pseudonym Olivia Wesley Watts, who in her "report" is explaining to the Commissioner how she has come to be locked in a basement with over two million dollars' worth of diamonds. All but the last chapter has been revised, and Ollie has put the thirty-six pages of the preceding chapters into a dispatch case, intending to have it copied at a Kinko's. ("Less is more. That's an adage amongst us writers," he tells his sister when she questions whether he's really written a novel-length manuscript.) 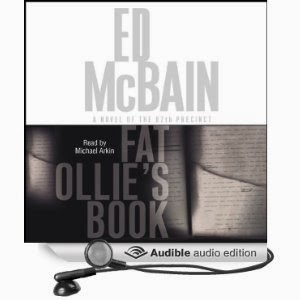 When the dispatch case is stolen in a smash-and-grab from Ollie's car while he's inside King Memorial Hall, its recovery takes precedence over the Henderson murder, as far as he's personally concerned. Unbeknownst to him, the thief is one Emilio Herrera, a cross-dressing prostitute and drug addict who, upon reading the fiction, believes it to be a true but "coded" account, and who endeavors to break the code so as to get his hands on the diamonds.

Meanwhile, Detective Eileen Burke, who has just joined the Eighty-Seventh squad, is partnered with Andy Parker, a man whose attitude is as odious as Ollie's. One of Parker's informants tells them of a major drug deal that's going down in six days in the basement of a building somewhere in the city. What basement he doesn't know because the address keeps changing. He's only certain that the people involved aren't amateurs. He's somewhat wrong about that, however, as the reader learns soon afterward.

While Carella and Kling–and sometimes Ollie, when he's not trying to track down his manuscript–try to solve the Henderson murder, Burke and Parker's case becomes unwittingly entwined with Emilio's quest to locate the basement where Olivia Wesley Watts and the diamonds are held, resulting in some moments worthy of a good sitcom. 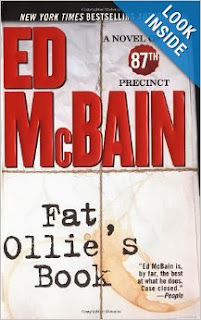 The reader also gets to join Emilio in reading Ollie's book, sections of which are scattered throughout the broader narrative. These make for great comedy in themselves, loaded as they are with English usage uncertainties–e.g.:

"Because that's where Lock lost him because, you should pardon this, Commish–and this is just between you and I, or maybe even you and me–he had to relieve himself....So it was with considerably great expectations that I took the call from The Needle that morning. Hopefully, The Needle...

"Or perhaps I hoped The Needle...

"Or maybe I was even hopeful that The Needle...

Hopefully, The Needle would have some information on Grant or his missing wife Marie or his cousin Ambrose Fields."

I was fourteen when I first read an Eighty-Seventh Precinct novel, 'Til Death, and I've been a fan ever since. The fifty-second entry in the series, Fat Ollie's Book has at least as much verve as the earliest entries, and quite possibly more. Ed McBain's characters, including many of the minor ones, are three-dimensional figures. His narrative style is laced with wry humor. His ear for dialogue is and always has been impeccable and unerring. His pacing is flawless.

As is, or even like, nearly every Eighty-Seventh Precinct mystery, Fat Ollie's Book is superb entertainment.

Barry Ergang ©2013
Derringer Award-winner Barry Ergang's fiction, poetry and non-fiction have appeared in numerous publications, print and electronic. Some of his work such as Stuffed Shirt, Dances of the Disaffected, and PUN-ishing Tales: The Stuff That Groans Are Made On are several titles among others available at Amazon and at Smashwords. Visit his website: http://www.writetrack.yolasite.com/

UPDATE: Barry called me this afternoon and among other things advised that Todd Mason was collecting the links and posting them on his "Sweet Freedom" blog. He is and you can find the list here.
Posted by Kevin R. Tipple at 12:30 AM