Barry is back this week with his review of THE BRAT by Gill Brewer. After you read his review make sure you head over to Patti Abbott’s blog here where the focus for Friday's Forgotten Books today is on “Crime Fiction of the 1950s.” I was born in 61 so I have to leave this topic to my elders.

It’s giving nothing away in the form of a spoiler to report that this is a story of theft, murder, betrayal and pursuit. Readers of the Fawcett Gold Medal edition will realize that by the fourth page, which is the end of the first chapter. 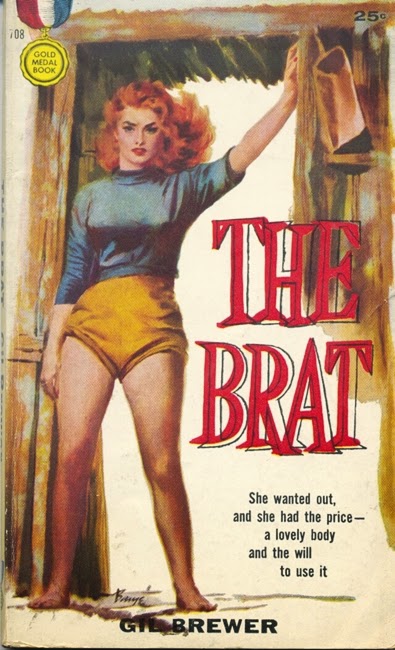 We learn in a flashback that after his fiancée was killed in an automobile accident, Lee Sullivan was a man adrift: “After that my life was a hollow beating back and forth across the country, away from my home in Florida, seeking nothing, slowly spending what money I had.” It was on a trip to the Everglades where he met and became instantly and obsessively smitten with the appropriately surnamed Evis Helling. She was equally taken with him, and was eager to get out of the Glades and away from her nuclear family and a dangerous, literally kissin’ cousin named Berk Kaylor. And so he took her away to the St, Petersburg area, and they moved into an apartment together. Evis got a job at a loan company and Sullivan went to work for a print shop. Evis talked him into buying a house, and still later on into opening his own printing business. She also concocted a scheme to steal a hundred thousand dollars from the loan company.

When the novel opens, a hungover Sullivan comes home to an empty house. Earlier that day he’d told Evis they weren’t going through with the robbery, but now his gut instinct tells him he must get to the loan company to try to stop her. When he does, he finds the slain body of her coworker Ray Jefferies. Evis—and the money—are gone. Sullivan also finds items she planted to frame him for Jefferies’ murder and the theft.

And so Sullivan pursues Evis to try to recover the money and clear himself. Aware that her hubris will take her back to the Glades long enough to let her family know of her new opulent lifestyle before she shuns them again, Sullivan heads there. His pursuit, of course, is not without obstacles, physical and emotional, and some surprises. Among the obstacles is an especially zealous sheriff named Hugo DeGreef. I’ll leave readers to discover the surprises for themselves.

In his outstanding article about Gil Brewer in Mystery*File, Bill Pronzini writes that Brewer originally aspired to write literary fiction: “…he understood and loved fine writing and hungered to create it himself, to just once write something of depth and beauty and meaning.” There are descriptive sentences and paragraphs in The Brat that substantiate Pronzini’s contention, but there are also some that seem pulpy, overwrought, as though they’re straining for effect, or are downright nebulous. Take, for example, the book’s opening sentence: “When I called her name, it was as if only the faint odor of her perfume occupied the urgent darkness of the house.” Is there a poetic quality to it that creates an atmospheric effect? Perhaps. But at the same time, it stopped me cold for a moment while I tried—futilely, I confess—to make sense of it. Much later on, describing Hugo DeGreef, Brewer writes: “When he spoke, it was as if the sound of his voice was scraped off the edge of thick meat….” A little Raymond Chandler influence? Possibly, but the simile doesn’t work—for me, at least—because I have no idea what such a voice is supposed to sound like.

The aforementioned are, however, quibbles about what is otherwise a brief, tense, and eminently readable novel of action and suspense by one of the acknowledged masters of noir fiction who came out of the era of paperback originals. Probably the worst thing about The Brat is its title, because Evis is a great deal more than bratty.

Former Managing Editor of Futures Mystery Anthology Magazine and Senior Editor at Mysterical-E, Derringer Award-winner Barry Ergang’s work has appeared in a variety of publications, print and electronic. Some if it can be found at Amazon, Smashwords, and Scribd.
Posted by Kevin R. Tipple at 12:30 AM

I love the cover on this edition of THE BRAT. Gil Brewer was an uneven writer, but THE BRAT is one of his best works.