Excerpt from "By The Light Of The Moon...” in the Carpathian Shadows Volume 2 Anthology

Recently on one of the many lists I am on the subject of going back and reading your own published work came up. The theory, advanced by a few folks, was that figuring out what had worked before would allow you to be a better writer in terms of sales in the future. For me, the theory does not work because many of my published pieces read to me now like I never wrote them. I have changed massively as a writer and think, in large part, it has happened due to my illness as well as what has happened to Sandi the last several years. I have serious doubt at this point whether I can ever write fiction again that would sell in a market outside of self publishing. 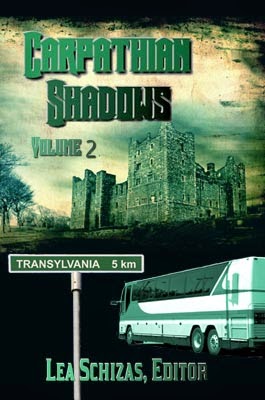 While there are many stories I no longer really remember writing, my story “By The Light Of The Moon” found in the Carpathian Shadows Volume 2 anthology is an exception to that. I remember this one vividly.
The premise by those in charge of the anthology was simple--- Deep in Transylvania in the Carpathian Mountains the castle of Lord John Erdely is a modern day tourist destination. A freak storm forces a group of tourists to take shelter at the castle where it soon becomes clear the ancient legend may have a modern day connection.
While thinking about the possibilities, an image came to mind which I could not get out of my head. The image was in my dreams as well as  my waking hours when I worked and did other things. That image became part of the ending of a story that blends elements of mystery, horror, and fantasy into a tale that most have found to be very good.
If you are intrigued by the sample below ordering is easy. Available in print and e-book forms at the publisher, Amazon, and elsewhere it is easily to pick up in both print and e-book formats. I also have a few print copies left which means you can order an autographed print copy of Carpathian Shadows Volume 2 direct from me for the low price of ten dollars which includes media rate postage.
I hope you take a chance on the book…

What he was asking was whether or not the suspect had made it alive into his station. He should have but sometimes accidents happened in the field. The young officer stepped a little ways into the room. New to his job, he was working hard to impress, which is why the Commander had chosen him. Things had to be contained, and he knew he could keep the man, more like a boy at twenty, in line.

"Typical American." The young officer couldn't keep the scorn out of his voice, "Very emotional. Fits of screaming and crying when we placed the cuffs on him. He's sitting quietly in Interrogation 4 now."

The young man saluted, swiveled in his black spit-polished boots, and strode confidently out of the office. The Commander sat back and smiled to himself while he listened to the pleasurable sound of the boots striking the floor fade away down the long hall. To be young again and so sure of righteousness, of purpose. Not that it really mattered, as fate ordained everything.  His die was cast long ago, as was my own, he thought, and the idea depressed him as it had the last few months.

He stood and stretched, feeling his spine pop before he walked down the same hall. Unlike the young man before him who had turned right so that he could pass the front desk and go back out on patrol, the Commander turned left and, with a few steps, began to feel like the walls were closing in on him. The truth was, they were as he journeyed deeper into the old section of the garrison. This part had been built into the mountain long ago, and the Commander secretly suspected that there had to be a tunnel from here up to the castle far above. He suspected it but had never tried to find out because he knew that in such matters, a lack of knowledge was safer than knowing the truth….


I remember this story, Kevin, and have always felt it was one of your best.I hope to see some new stuff from you soon.

Thank you, Earl. You have a better chance of winning the lottery than seeing that happen. I think I am done.