September… football is back, the weather should be cooling off, and Halloween candy is on the shelves already. Barry kicks off things here for this first Friday in September with his review of the 2009 release by James Patterson of I, ALEX CROSS. Make sure you check out the full list over at Patti’s blog and don’t forget to read her novel, The Concrete Angel.

This is supposed to be a review of James Patterson’s novel I, Alex Cross, but it’s going to take into account some peripheral but not unrelated factors, so bear with me, skip, skim, or simply stop reading now. 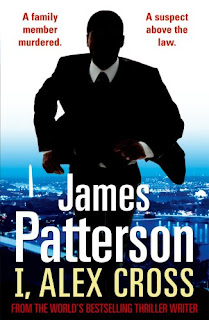 I read this novel because I have a number of friends who are hardcore James Patterson fans. Because of their enthusiasm and dedication, several years ago I tried to read one of the novels in his Women’s Murder Club series. After five or six chapters I gave up. It seemed to be clearly yet another in what has been a deluge over many years of deranged serial killer stories, too many of which pander to some readers’ cravings for mindless sensationalism but otherwise offer no psychological insights into these characters and why they behave as they do.

When I told one of my friends about this, omitting the editorial about pandering, she said to forget the Women’s Murder Club and read an Alex Cross novel instead. Having seen the two movies starring Morgan Freeman as Cross and thinking they were just okay for what they were but far from stellar, I obtained an e-book edition of I, Alex Cross.

With regard to James Patterson, I must in all honesty point out that I have a problem with this man and his—as the Wall Street Journal referred to it in a couple of articles—publishing empire. Said empire means the release of a considerable number of books annually, the majority of which seem to be co-authored. According to the WSJ, Patterson outlines the stories, after which his collaborators write them and send him their efforts. He, in turn, either revises portions of or completely rewrites them. The books appear with covers featuring his name in huge fonts and his co-authors’ in much smaller ones. I can never help wondering if in most cases the co-authors didn’t do the bulk of the work for which Patterson gets the lion’s share of credit.

Although Patterson seems to have written the Alex Cross series without collaborators, I have to point out to Patterson fans that British author John Creasey, who is best remembered for a number of mystery series but who also wrote in other genres, produced in his lifetime—see for verification the John Creasey entry on Wikipedia and the book Murder Ink by Dilys Winn—more than five or six hundred books that he wrote entirely by himself! 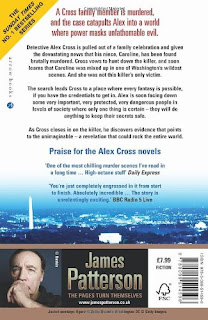 On to I, Alex Cross, which being the sixteenth book in the series, is not the one to start with, as I soon discovered, since I had no idea of the back stories of Cross and other series regulars.

When the grisly remains are discovered of Caroline Cross, niece of Alex Cross, detective in the Washington, D.C. Metropolitan Police Department, and it subsequently becomes apparent that she is but one of many victims of a particularly kinky and callous killer, Cross dives into the investigation with an irrepressible determination to find the party responsible. His probing intersects and sometimes interferes with that of the FBI and the Secret Service, while simultaneously he must contend—and quite emotionally—with the potentially fatal illness of his elderly grandmother, with whom he, two of his three children, and his girlfriend Bree live.

The storyline involves an expensive and exclusive mob-owned brothel called Blacksmith Farms run by Tony Nicholson, which caters to the wealthy, famous, and powerful. Apart from potentially embarrassing—and destroying the reputations of—senators and members of Congress, both male and female, revelations about Nicholson’s clientele might also spotlight members of  President Vance’s Cabinet and  threaten the security and equanimity of the administration. Thus, the situation must be dealt with by the federal agencies.

Nicholson’s operation code-names its clients, one of whom is the killer known as Zeus. Zeus, whoever he actually is, is among those people powerful enough to prevent disclosure of his true identity. You may rest assured that he’s a deranged serial killer whose motivations are not delved into insightfully—this despite the fact that, according to “biographical information” on Patterson’s website, Alex Cross has a Ph.D in Psychology, with focuses on abnormal and forensic psychology. (http://www.jamespatterson.com/alex-cross#.V79i2qLVN9M)

Despite a poorly formatted and proofread e-book edition, I found the story to be an  almost irresistible page-turner—the key word there being almost—despite generally lame and sometimes clichéd prose, and very superficial (and often-clichéd) characterizations. Patterson is fond of short chapters in fast-moving novels. This one contains 117 chapters. (Yes, you read that correctly: 117.) The problem is, the revelation of Zeus’s identity is a complete and utter cheat. That killed the novel for me and made it a thoroughgoing disappointment—not to mention an irritating and aggravating one.

Years ago, a very successful fiction writer taught me the valuable lesson that in spite of life’s tendency to throw us unforeseeable surprises from left field, competent fiction is not allowed to. It must allude, however subtly, to the surprise or twist ending lest the reader feel cheated. In other words, the reader should be able to say, “If I’d spotted and paid attention to that moment, I’d have seen the finish/surprise coming.” Patterson doesn’t reveal Zeus’s identity until chapter 108 of 117 chapters, and the character is not someone the reader has encountered earlier except in the guise of Zeus. Having the “least likely suspect” in a mystery novel turn out to be the villain is a long-established and perfectly acceptable tradition, but the author has to play fair with the reader by introducing the suspect early on and having him or her appear in places throughout the story along with the other, more likely suspects. Patterson doesn’t. He introduces and then reveals his villain’s true identity when the story is nearly over.

Will I be reading any other Patterson titles in the future? There’s no way of knowing definitively, but I wouldn’t bet money on it. There are too many better constructed and written mysteries and thrillers available as superior alternatives.

Derringer Award-winner Barry Ergang’s work has appeared in a multitude of publications, print and electronic. You can find some of it in a variety of genres in e-book formats at Amazon and Smashwords.

Thanks, Earl. I try. There's no point in dancing around it: this novel deserves to be forgotten, given the way it cheats readers.

Thanks for the warning, Barry, altho the only Patterson novel I tried to read (cannot remember the title) was so trite I abandoned it after about 30 pages and donated it to the library.

Based on this one, Mathew, I don't blame you. I only read this because a Patterson-fan friend urged me to try an Alex Cross novel, though not a specific title, but--as the review indicates--it turned out to be a complete turkey. As a staunch animal-friendly lover, I'd normally think about urging President Obama to grant it clemency on Thanksgiving. In this case, however, and because of physical and virtual pages which cheat readers, I'll pass.