This first Friday in October is rather special around here as it is Scott’s birthday. Also a bit bittersweet as well as his mother, and my everything, Sandi, is not here to celebrate with us. So, today is one of those days that are a bit difficult as we try to deal with it all. Make sure you check out the full list of books over at Todd Mason's blog. 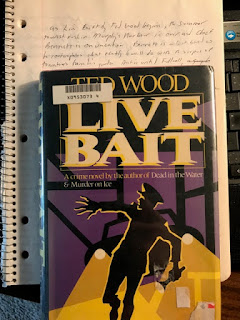 As Live Bait by Ted Wood begins, the summer tourist rush in Murphy’s Harbour is over and Chief Bennett is on vacation.  Bennet is a bit bored. Not much is going on for him other than he has to figure out what to with the surplus of tomatoes from his garden. That is until Fullwell pulls up and gets out of his cal.

Fullwell works for Bonded Security and did not making the 200 mile drive up from Toronto on a social call. The company he works for has had some incidents at some of their construction sites during the night hours. The latest incident included a security guard badly beaten who wound up in the hospital. He is going to be okay, but has a long road of healing in front of him.

Something has to be done. Fullwell would have done the normal thing and would have contacted the Toronto Police, but the new VP of Marketing shut that down hard. The VP of Marketing is all worried about the publicity angle. He is the golden child to those in power, so if Fullwell ignored him and went to the police anyway, Fullwell would lose his job in a heartbeat. Since that is not an option, he has convinced the VP they could use Bennett as bait to see if the goons come by and try the same thing again. Fullwell is sure that Bennett with his skills, ex-military after doing a stint with the Marines in Vietnam and ex Toronto Police officer, can more than hold his own against a couple of thugs. 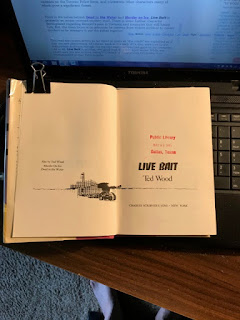 Bennett is bored and is intrigued. The money would also be pretty good as the amount he would make for a night or two of work down in Toronto is the same as a full week of work back in Murphy’s Harbor. Not to mention the fact he can see his sister and her family while he is in Toronto

He agrees and goes undercover on the job site of the most recent attack. At first, things work exactly as plan. Until they don’t. Once they start heading in the wrong direction, things quickly go downhill. Bennett in danger is one thing and he signed on for that. But, things get very personal as Bennett’s sister and her family is suddenly at risk in a case that involves organized crime from Canada and Asia, enemies on the Toronto Police force, and numerous other characters many of which pose a significant threat.

Third in the series behind Dead in the Water and Murder on Ice, Live Bait is primarily an action-oriented mystery read. There is some further character development regarding Bennett’s past in Vietnam and memories that still haunt him. But, the main focus is on action as he careens from violent incident to violent incident as he attempts to put the pieces together.

This read also comes across as bit dated in spots as “the triads” are explained as if they are new phenomena. Of course, back in the early 80’s they were new to the mainstream audience, though the concept and practices had gone on for centuries.  All in all, Live Bait is another very good read in a very good series. While one could read this one without losing very much of the previous two books, it is recommended to read them in order.

You had me at "surplus of tomatoes," Kevin. And I've just had lunch! This does sound like a good read. I'll have to check the series out.