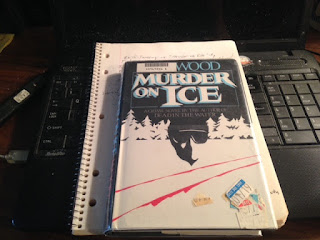 It is January as Murder On Ice by Ted Wood begins. Murphy's Harbor is cold and snowy as befits the area 200 miles north of Toronto. This second book in the series finds police Chief Reid Bennett still dealing with some of the repercussions from events in Dead In The Water.

Long known for their summer tourism, one of the local business men has created a new event, the winter carnival. While this is the second annual event, for Chief Bennett this is his first though he is not that concerned. While there have been a few strangers around, it, the event is not anywhere big enough to have garnered much attention beyond the locals. Most are just treating it as another excuse to get drunk so the local bar is doing a brisk business. The highlight, over at the local Legion Hall, will be to select a queen of the winter carnival.  Chief Bennett along with his police dog, Sam, are present to see a non-local resident and clearly the most attractive young woman around, Nancy Carmichael, crowned queen. Seconds later the lights go out, and Nancy is abducted and vanishes into the snowy night.

Chief Bennett and Sam plunge out into the night in pursuit. The kidnappers might have been able to get away with it if not for the heavy snowstorm that made travel in the area nearly impossible. Those conditions also created a trail in the snow that Bennett and Sam could follow. A trail that vanishes a little more every minute as the snow comes down.

The result is a harrowing search and investigation that results in more violence and death than clues. What at first seems to be a staged abduction by a feminist group for publicity purposes clearly has serious undertones as the bodies begin to stack up while the storm rages.

Second in the series, Murder On Ice is just as good as the first book. Fact, it might be a slightly better book. In a sense, this is a locked room mystery set outside as the weather keeps everyone bottled up and Chief Bennett can’t receive assistance from outside law enforcement. While little is done to further flesh out the Bennet character, the focus is on plenty of action and the occasional references to how combat experiences in the steamy jungles of Vietnam, help him stay alive in a nighttime frozen wilderness half a world away. A mystery full of twists, Murder On Ice by Ted Wood is strongly recommended.

My favorite of the series, I think, though there are other good books in it. Thanks for the review, Kev.

Very nice review, Kevin, and I want to try this series. I like police procedurals, I like books written in the 80s, and I enjoy reading books set in Canada.

I read this one quite a while back, and all I remembered was the title--but your review brought it all back. Might be time to try another in the series.

Thank you for reading, Rick. Not yet sure if it is my favorite or not. Really good one.

TracyK, thank you. I do too.

Good stuff, Matt. I have read two more. Those reviews are in the pipeline. :)