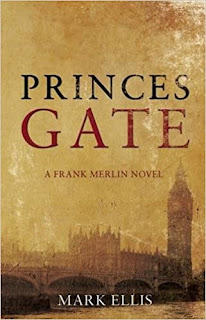 Princes Gate by Mark Ellis (Troubador Publishing, 2011) is the first book in the Detective Chief Inspector Frank Merlin historical mystery series, set in London during the beginning of World War II. Three more books follow so far, with the latest released in November 2019. It is a fascinating look at the daily life of Londoners during the tense waiting in early 1940 for the hostilities between England and Germany to break out. While some of the populace believed that Hitler’s attention could be diverted elsewhere, others were resigned to the oncoming war.

DCI Frank Merlin is upset with his life in general. His wife died of leukemia and his boss at Scotland Yard will not release him to enlist for military service. Crime in London is rife and the steady stream of new cases across his desk to process with reduced staff does nothing to help his mood. The discovery of the body of a woman in the river is worrying. The death is clearly not natural but the lack of ID stalls an investigation. When a secretary at the United States Embassy is reported missing a week or so later, Merlin matches the two and finally has enough information to work with.

A few days after Merlin’s first visit to the Embassy, where Ambassador Joseph Kennedy is on a well-timed working vacation in his home country, one of the chauffeurs turns up murdered. With two homicides among the personnel, the senior embassy officials can no longer deny that something is seriously wrong. Merlin’s research into the lives of embassy staff reveal some are involved with members of London’s criminal element, who get pulled into the murder inquiries, much to their chagrin.

This is a satisfying police procedural on multiple levels, not least of which is its historical credibility. The author bio says that his mother lived in London during World War II while his father served in the Navy, and he incorporated some of their stories into his novels. The characters, even the minor ones, are great; Merlin himself is immensely likable and his sergeant Sam Bridges is a sympathetic foil. The mystery itself is well plotted and justice is served in the end, if perhaps not in the usual way. Recommended especially for readers of historical mysteries and police procedurals.