Imagine, if you will, the possibility of crossing from this plane of existence into another one built on a role playing game. Where the decisions you made in setting up your character and your abilities, as well as ones made by all of the players in your group, could have life and death consequences within moments of your arrival. That magic, vampires, goblins, and more are totally real as is your ability to fight as a warrior and maybe heal yourself and others depending on the severity of the injury and what you chose moments before here in this world. That is the world as it exists for the characters in Outpost: Monsters, Maces and Magic Book One by Terry W. Ervin II.

The whole reason Glenn was in the Grimes Student Center that Friday evening was research for his Sociology 102 paper. He plans to participate in one of the get togethers hosted by the Role Playing Game Club on campus. By hanging out with the players of whatever game he chooses to be a part of, he hopes to gather enough material for his paper. A key point of his paper is to participate in a social setting or situation that is unfamiliar to him and being part of a role playing game fits the requirement very well.

While he has played a little bit of Dungeons & Dragons years ago, it wasn’t very much, and nobody needs to know that information. The point is to get in, play for a couple of hours, and get out as he has a life and isn’t going to waste his Friday evening this way. 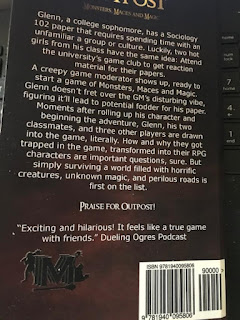 It does not take long before he as well as Stephanie and Kim, two girls who are also from his Sociology class, are at a table with Kirby, Derek, and Ron along with a Game Master. Not only is the Game Master a bit unfriendly, he just seems rather weird and Glenn thinks there is something up with him, but pushes those thoughts aside as he and the other players build the characters and plan out the game.

As all the players are committed to the game and their characters, the Game Master pulls out various items and sets up things to get underway. The last item, when activated, pulls the six players into another dimension based on the fictional world they just created. What seemed to be a joke or unnecessary before, now has major importance as their very existence hangs in the balance at almost every moment. The foes are many, the challenges get harder and harder, and getting back to the reality they left is going to have to wait.

The first book of a series, Outpost: Monsters, Maces and Magic Book One by Terry W. Ervin II is full of intrigue, mystery, action and adventure, and occasional flashes of humor which are often of the adult variety based on how a certain female appears in the fantasy world. Billed as AN “LITRPG novel” or a literary role playing game novel, this is a book where the read combines role playing games with fantasy elements to entertain readers. Those who are seriously into role playing games may find it a bit light in that regard as the focus in much of the book is more of a fantasy quest style story. Those of us who are not serious about such games and therefore are not burdened a need for continuous complicated game play information that has little relevance as the read unfolds can relax and just enjoy the tale.

A fun read, Outpost: Monsters, Maces and Magic Book One by Terry W. Ervin II is a solidly good read and well worth your time. It is available in print, audio, as well as eBook formats.

Print material received many moons ago from the author with no expectation of a review. I do have the next in the series, Betrayal, here in my personal print TBR pile and intend to read it soon.

Thanks for reading and posting a review!