Review: The Eyes of Texas: Private Eyes From The Panhandle To The Piney Woods Editor Michael Bracken 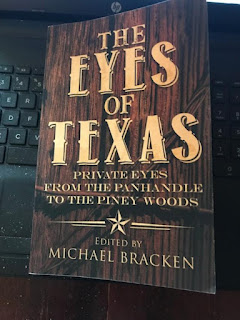 The Eyes of Texas: Private Eyes From The Panhandle To The Piney Woods opens with a very short introduction by Editor Michael Bracken before moving on to the stories. First up is “Chasing The Straight” by Trey R. Barker. Derrick Kruse is a bit different than most private investigators and knows more than he would like about domestic violence and abuse. His latest case involving Billie Vogan is a case that came to him during the weekly poker game. Now that he knows about it, Derrick and the voices in his head have a problem that must be fixed.

William Dylan Powell takes readers to 1984 in Corpus Christi in his tale “The Haunted Railcar.” Our private investigator has his own boat and is working on it when Dell McClendon shows up. Not only does Dell arrive in full clown make up which will set the dog off, as he knows, he really should have stopped walking up the pier when told to stop. Sure, he would still have the problem that caused the visit to the boat, but Dell McClendon would also still have his own nose fully intact.

A murder is rare in Robertson County. They have one this Thursday morning in November at the Camp Hearne Historical Site. In “The Yellow Rose of Texas” by Josh Pachter, the local High School English Teacher, Elsie Jordan, is dead and probably from strangulation. Helmut Erhard, a private investigator, found the body while on another matter. Finding the body made it very personal for him and he is not about to just let the local law handle it.

Like her father before her, Nicky Moran is a private investigator based in Fort Worth who uses a special bar stool at the legendary Billy Bob’s as the office. “In Cowtown” by Robert S. Levinson the client is one Mr. Jergens who likes to be referred to as “Slim.” The client believes that somebody is out to murder him and is very sure about the identity of the suspect. The suspect has one heck of a motive and the local law is not moving on the case. Nicky does not come cheap, the client is more than willing to pay and has the funds, and she is soon on the case.

Houston is the setting for “Harvey and the Redhead” by Debra H. Goldstein. In the aftermath of Hurricane Harvey. It is not necessarily a good thing to be carrying around the name of “Harvey.” Yet the detective is, and while pretty much everything the detective owned has been destroyed, the bills still must be paid. The latest client is Olive Twist, part of the legendary Twist Realty and Developments. A family with money, contacts, and resources, she wants a painting returned to her and wants it done discreetly for numerous reasons.

The former Texas Ranger works now and then as a process server and/or private investigator after more than thirty-two years as part of the legendary local law enforcement agency, Texas Rangers. Huck Spence is just trying to stave off boredom in “See Humble And Die” by Richard Helms. His latest case is to find “Ralph Oakley” and it should be easy enough to find him.

Sitting surveillance on a place deep in the night gets boring as one fights to stay awake and focus on the matter at hand. Such is the situation for the private detective in “No One Owns The Blues” by Scott Montgomery. The years have passed, and a lot has happened, but Sharon Turner, still has a hold over him. A singer and a good one, she has a complicated relationship with her current financial backer. She wants him checked out in this tale set in Austin. 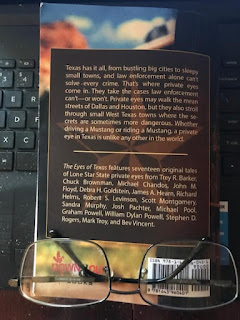 Colt Colton just got hired to trace the history of some cars recovered from the Houston area in the aftermath of the Hurricane. He’s from Gary, Indiana originally. But, eight years in the Dallas PD working in the Auto Theft Division means he is very good at tracing cars and finding owners. Tracking down Porter Shackleton of PS Services in Hempstead should be easy enough though the recovery company has tried the easy way in “Shaft on Wheels” by Mark Troy.

Michael Boone sees her long before she makes it to his office. The lady has a problem and needs a private detective in “Triangles” by John M. Floyd. She separated from her husband awhile back. More recently, she used her house key and went into the house to take an item that her husband is very serious about getting back. Since the item in question may have been acquired by her husband in the less than stellar fashion, the police are not an option. This remains true even though she believes her husband is trying to not only get the item back, but have her killed for what she did.

It is back to Austin as a setting in “Purple And Blue” by Stephen D. Rodgers. Our narrator is sitting surveillance on a certain car owned by Gregory and the client. Based on some evidence, apparently somebody else believes the car is owned by somebody named “Cynthia.” This misplaced identity has led to a serial tire killing spree by party or parties unknown and Gregory needs it stopped now.

Houston and the immediate area is the setting of several stories in the anthology. Hurricanes by name and not serve as a backdrop to several stories in one way or another. Such is the case with “Lucy’s Tree” by Sandra Murphy. Hurricane Harvey is unloading on the area and reminding our narrator of another powerful storm and his late wife. In the here and now, neighbors need help and, in so doing, a long ago murder is finally solved.

Unless you are an attorney licensed to practice in the great state of Texas, or a police officer, it is best to avoid and all visits to the jail. In “Unwritten Rules” by Chuck Brownman, private investigator Rafe McAlister is at the jail because it is hi job to be there as he is an investigator for an attorney by the name of Bobby Williamson. Their latest client is Tommy Nguyen who is in jail on a murder charge in the death of Vic Mallory. Racism, the history of the war between Texas and Vietnamese shrimpers, and more are at work in this tale.

Andy Wilkins came to Jefferson, Texas, in search of one specific person. In “Blackbirds” by Graham Powell, his search for Jack Lynch brings the attention of the local police chief and quite a few other folks. Not all of that attention is of a positive nature, but Andy Wilkins drove all the way in from Fort Worth and he has a job to do.

Riley is in the flood waters and pounding storm of Hurricane Harvey by way of a small aluminum fishing boat. She sits in the bow with Donald at the tiller as they navigate flood streets and drowned wreckage in the hunt Carl Vincent Farlow. Known to the locals as a storm chaser, she believes him to be a serial killer. A serial killer who uses severe weather events as a cover for his killing spree over the last twenty five years. In “Weathering The Storm” by Michal Pool, there are victims to be saved and a killer to be found and stopped.

The weather is quite a bit dryer in “Trip Among The Blue Bonnets” by James A. Hearn. Trip is at a certain diner south of Lampasas looking for the spouse of his niece, Tammy. Everybody in the family hated the guy and that was before Tammy, his niece, got worried he was cheating on her. Now that he found him a very long way from home, Trip must figure out exactly what is going on with him as well as a couple of other things.

West Texas, specifically the town of Odessa, is the setting for “West Texas Barbecue” by Michael Chandos. Every town has their own homegrown mobster type and Mr. Oxnum is the one for Odessa. His wife took cash and some important papers out of his safe before she run off a couple nights ago. Mr. Oxnum, who prefers to go by “Mr. Ox” is only really interested in the papers. He wants them back and wants them back now. He has a very good idea where Mr. Taylor can go to find her and get them.

Ms. Amanda Treviño needs the help of private investigator Benjamin Kane in “The Patience Of Kane” by Bev Vincent. She is far along in her pregnancy and would like to know the real reason her husband, father to their child, died in a recent car accident. The crash report blames driver inattention and she believes that to be nonsense. She also does not understand why he would have been driving where the car crash happened. She wants to know what did really happen and is not worried as to what he will find as she has faith in her husband and knows he wasn’t running around up to no good when he died.

Short biographies and several ads for other books by Down & Out Books bring the read to a close.

My reading copy came as an autographed gift by way of many of the involved authors who presented it to me at Bouchercon 2019 in Dallas. I was stunned to be gifted the book and am very appreciative of the authors who did this for me.

Sorry I wasn’t there to add my Josh Hancock to the gift!

Would have been cool, Josh.