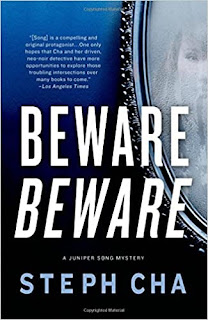 Before Steph Cha achieved international fame with her multi-award-winning novel of contemporary social dissonance in Los Angeles, Your House Will Pay (Ecco, 2019), she wrote three books about Juniper Song, a perceptive young Korean private investigator in Southern California. In the second book, Beware, Beware (Minotaur, 2014) Song is trying to put the harrowing events of her debut adventure behind her. Song has also become formally apprenticed to a private investigative firm and is working on accruing enough hours in the field to receive her own license.

One day Chaz Lindley, her mentor and part-owner of the firm, who is one of my favorite characters in the book, hands off what should be a simple assignment of finding and following Jamie Landon who seems to have gone AWOL. His artist girlfriend Daphne Freamon in New York is afraid his current job with a Hollywood star might encourage him to re-engage with drugs and is willing to pay whatever it takes to put her mind at ease.

Song’s monitoring suggests Daphne had good reason to be concerned. The all-night parties with Hollywood insiders and periodic visits to an isolated house in the Valley indicate Jamie might well be back in the drug world. Song breaks the news to Daphne and continues to watch Jamie while she waits for Daphne to decide what to do next. She’s nearby when Jamie awakens after a night of partying to find the Hollywood star he works for violently dead. He calls Daphne in New York, who tells him to call Song, making her one of the first people on the crime scene. She calls the police, and the havoc that surrounds the unnatural death of a famous personality ensues.

Jamie is under suspicion, and Daphne wants Song to try to uncover enough evidence to at least create reasonable doubt. Song’s interviews and research reveal the back stories of the players are more complex than she thought. Her shock is comprehensible by anyone who’s taken people at face value, only to learn reality is far different. The lies she’s been told and how she is supposed to proceed causes her a good deal of lost sleep. All of this against a backdrop of modern Los Angeles, which is captured in well-turned vignettes.

Song is an intriguing spin on the contemporary private investigator, intelligent and alive to nuances, perhaps a little too sensitive for the sometimes brutal profession she’s fallen into. The supporting cast of characters is realistic, not a cardboard outline among them. The noirish story line is almost tortuous in its convolution. Recommended.