As I am reading the latest mystery in the series, Never Look Back In Texas, it seemed a good time to remind you of this really good short story collection. After you read my review, head over to Patti Abbott’s blog for her FFB Review as well as the Happiness Is A Warm Book where Aubrey Hamilton has her FFB Review. Stay cool and do not let the opinions and news of the world make you nuts. 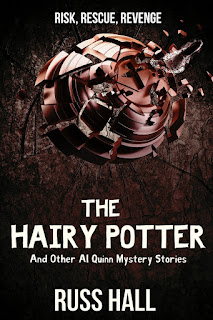 The Hairy Potter And Other Al Quinn Mystery Stories opens with the signature tale, “The Hairy Potter.” Retired Detective Al Quinn, his brother Maury, and their girlfriends, Fergie and Bonnie, are out in the dark Texas night on a reconnaissance mission. They are trying to sneak onto a property undetected to swipe some possible evidence from a dumpster outside a barn near a certain house. Hopefully, the pottery shards they have recovered will prove their theory.

With Fergie behind the wheel, the driving should be fairly safe and Maury and Bonnie are in the back seat not paying attention to anything but each other. That is until a minivan nearly takes them out in “It’s Raining Money.” The near crash gets everyone to notice the fact there are numerous hundred dollar bills scattered along the rural roadside. Whether it came from the reckless minivan is yet to be determined.

Brethel was right when he said his niece, Verlina, was clearly “The Reluctant Bride.” She obviously does not want to be there the church. The rest of her family also appears to they would much rather not be there including the patriarch, Skeld Hanson. Like the bride, Al Quinn knows the groom, Joey Canfield, as well and thinks that the kid is a decent sort. Something seems to be up with the sudden marriage deal, but the obvious possibilities are easily ruled out.

Maury is sure there is a certain cheater at work in the county’s half marathon for seniors as he has won the past three years in a row. Maury beat him all the time when they were kids decades ago and plans to do it again in “Not To The Swiftest.” Maury wants to do it all on his own and prove Mark Shiner is cheating, but it won’t be long before Al and the others are also involved.

When Al retired, he planned to spend a lot of time out fishing from his boat on the waters of Lake Travis. Life has not, for the most part, has not worked out that way. Al is finally on his boat as “The Last First Time” begins. He zooms around Windy Point and then shuts the boat down so that he can drift into the wide cove where he had been fishing the day before. Thanks to the ongoing drought across all of central Texas, the water line has dropped a little lower and he can easily see the lip of the rusty metal barrel in the lake. He’s surer now that he needs to call his old boss, Sheriff Clayton, and get some help out there to him on Lake Travis. After all, bones in a barrel that was dumped however long ago into the lake is going to be a problem since most likely those bones are human in origin.

Maury got roped into performing some sort of magic deal at the local community theater. The talent show is intended to be a charity fundraiser. Because Maury is involved, he got Bonnie into the deal as part of the act in “Magical Me.” Al is going to be forced to not only watch the rehearsal, but the actual live event. 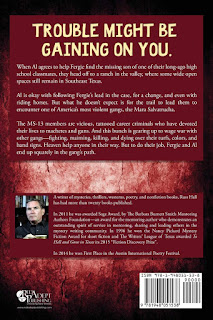 “Gone Fishing” find Al back on the water though he is not alone as he would prefer. Instead, he is out in the boat with Fergie. It isn’t long before he realizes she is out there only because she wants to talk. The daughter of her best friend is a bind and Fergie wants Al’s help. So much for a relaxing day of fishing.

The day is heating right on up as it does in Texas as “The Troll under The Bridge” begins. Al is working in solitude on his boat while his dog, Tanner, sleeps out on the dock. They are alone until Fergie comes down to the path escorting a stranger. Roy Coddles is his name and wants Al’s help as he claims to have been threatened. Or at least someone in his family has been threatened as an unknown person or persons sent him a message stating that within five days a family member will be dead. Somebody is upset with him and possibly for good reason.

Fergie and Al are out on the lake fishing when Sheriff Clayton calls Al. He needs the retired detective’s help with a problem as somebody is stealing dogs from their owners. The dog owners are upset, it is an election year, the current crop of detectives can’t figure it out, and Sherriff Clayton desperately needs Al’s help. Al has some ideas how to investigate the situation even if he isn’t thrilled with his latest unpaid project in “Dog Ninja.”

Al’s brother, Maury, got around a lot back in the day with many different women. While he is faithful to Bonnie and has been for quite some time, his past is a touchy issue. One of those past situations may have created a son. In “Tomorrow Becomes Your Yesterday” he attempts to answer that question and a few others with Al’s help.

It is early fall in “The Mole People” and Al, Maury, and Al’s dog, tanner are walking through the woods on the edge of Al’s property. That is until they notice something strange going in next door. On its own, what they saw doesn’t mean much. But, other things are going on in the woods and Fergie has noticed.

Maury and Bonnie were supposed to get married, but that plan is in real jeopardy as “The Angry Bride” begins. She left in a fit of rage and hasn’t come back. A phone call from an old girlfriend, who may be a bit crazy, started the issue and things are going downhill.

Al also has girlfriend trouble in the following tale, “A Special Kind Of Hell.” Al woke up to find Tanner making strange sounds and Fergie and her stuff gone. She’s gone and he has no idea why. He needs to find her and find out why she suddenly left.

Using the characters from the novels that began with To Hell And Gone In Texas  author Russ Hall has created an entertaining collection of mystery short stories. Plenty of action, humor, and cases that often border the strange can be found in these thirteen tales. Present too are all the characters that readers know and love. For those new to the books, these short stories are a great introduction. For those of us already familiar with the full length novels, The Hairy Potter And Other Al Quinn Mystery Stories is a tasty treat as we await the next Al Quinn novel.

Material was picked up to read and review using funds in my Amazon Associate account.