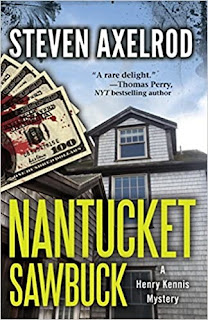 Steven Axelrod’s police procedural series set on Nantucket surfaced recently on a list of Cape Cod mysteries. I’ve gobbled up Philip Craig’s books about J.W. Jackson and Cynthia Rigg’s books about Victoria Trumbull, both cited on the list. Since Axelrod’s series was mentioned more or less in the same breath as these two favorites, I made a point to find a copy of the first book, Nantucket Sawbuck (Poisoned Pen Press, 2014). Kirkus, Publishers Weekly, and Booklist all agreed this series debut was worth reading, a rare editorial concurrence.

Preston Lomax was a wheeler-dealer, who earned a lot and spent a lot, especially on the mansion he was building on Nantucket Island. He did not hesitate to delay or forego altogether payments to the many tradesmen who made his renovations possible, earning a reputation among the island residents as someone to avoid if possible. Unfortunately with money tight, declining work from someone who should be and might eventually be a paying customer was just not an option for most of the folks trying to piece together enough jobs to exist. Lomax didn’t reserve his opprobrious behavior just for his contractors, all of his children hated him and his wife had cause to. When Lomax turns up dead, unquestionably murdered, new Chief of Police Hank Kennis couldn’t decide which direction to look first.

Lots of characters, maybe a little too many to easily keep track of, with corresponding multiple points of view and personal crises. Hank himself is an interesting guy, a published poet who left California to come to the East Coast and who is still finding his way in his new job and his new town. He definitely believes in the people aspect of policing; at one point one of his deputies refers to him as a “dinosaur” for failing to rely on computers for his collection and evaluation of evidence.

The book is divided into two parts, one setting the stage for the murder and the second for the investigation. The first was absorbing if a little long, but the real action starts in the investigation. Kennis is a careful, logical investigator, who encounters a few surprises on his way to an arrest. Well written, fully realized characters, satisfying resolution. Four more titles follow this one, creating an opportunity for a good summer reading binge.