Aubrey Hamilton Reviews: The Man in the White Linen Suit by David Handler 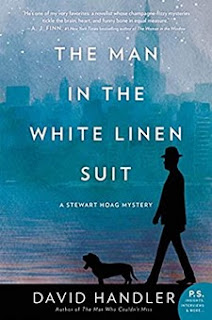 The Man in the White Linen Suit (Morrow, 2019) by David Handler is the eleventh mystery with writer Stewart Hoag (Hoagy) and his basset hound Lulu. Hoagy was once celebrated as an up-and-coming author with a brilliant first novel to his credit. He married actress Merilee Nash and the couple took New York by storm in the heady rush of their mutual career success. While Merilee went from one award-winning performance to the next, Hoagy encountered a writer’s block so severe it stopped him in his tracks. The marriage fell apart and Hoagy hit rock bottom, living in a squalid apartment with Lulu, a basset hound, his only companion. In the first book of the series he was offered the opportunity to ghost-write the memoirs of a famous comedian and was promptly drawn into a murder and subsequent investigation. After eight ghost-writing adventures, Handler dropped the series in 1997 and went on to other pursuits, such as establishing a second series set in Connecticut, where he now lives.

Fortunately for all of us, after a hiatus Handler saw his way clear to resuming the adventures of Hoagy, and 20 years later he released book nine. Book 12 is due out in 2021. The action is still firmly in the 1990s. Hoagy is still living in his ratty walk-up, but his on-and-off relationship with Merilee is definitely on again and he’s finally writing his own work, so he is feeling quite chipper. His editor asks him to meet with her and another editor, Sylvia James, whose reputation for abusing her staff and her authors is legendary. She has a job simply because her father, Addison, is a bestselling author a dozen times over who keeps his publishing house afloat. Sylvia wants Hoagy to find her father’s underpaid assistant who has disappeared with the only known copy of her father’s latest draft. She assumes he intends to hold the manuscript for ransom.

Hoagy, who knew the assistant years ago, suspects something else is going on. When the assistant shows up at Hoagy’s apartment, looking for a place to hide, he explains he was mugged at gunpoint for the typewritten pages he’d been copying. Hoagy leaves him safely in the apartment; later the same day the assistant falls to his death from the window. The large bump on the back of his head makes it murder, not suicide. Hoagy teams up with Detective Lieutenant Romaine Very of the New York Homicide Department. A twisty plot and a classic reveal of the criminal with a gathering of all the suspects in a room follows.

One of the things I most like about Handler’s books is that he is able to deliver a sound plot while creating memorable characters. So many books seem unable to strike a balance between the two. Lots of one-liners about publishing and New York, along with Hoagy’s wisecracks about everything, make the story an amusing read. Crime fiction fans unfamiliar with the series do not need to start at the beginning, although it helps to get a good sense of the long-running characters. Booklist starred review. Recommended!