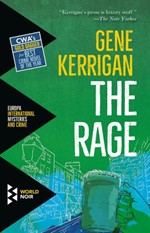 Gene Kerrigan is an Irish journalist who focuses on political commentary. He has an impressive list of nonfiction books to his credit. He’s also published four volumes of crime fiction. The most recent one, The Rage (Europa Editions, 2012) received the 2012 Gold Dagger for the best crime novel of the year from the Crime Writers’ Association. Structured along two story lines that eventually intersect, the story is set in Dublin during the aftermath of the real estate crash in 2008 to 2010. The first victim is a real estate developer killed in a home invasion, which is followed by a series of attacks on property developers and bankers. Detective Sergeant Bob Tidey is assigned to investigate them.

In the meantime Vincent Naylor, a small-time hooligan, is out of prison and determined never to return. This doesn’t mean he plans to eschew his previous life of crime. It just means he doesn’t intend to get caught. Within two weeks of his release he is planning a huge score on an armored car firm that collects cash from various businesses. The details are instructive; Kerrigan seems to know all about how to conduct a robbery like this.

The two stories come together when a retired nun reports what appears to be an abandoned car in front of her house. She knows it doesn’t belong to any of her neighbors. It is one of the get-away vehicles that Naylor plans to use to escape capture by the police after his big score. The gang planted a series of vehicles to use for a short time each to avoid being identified with a specific automobile. She reported the car to the local police and the information filtered up until it reached Tidey.

Fast-moving, evenly paced story, even though the point of view alternates between the two stories, which can make reading a little choppy. Rounded realistic characters, none of them perfect, even the nun, but all of them likable at some level, including the criminals. The ending is typically noirish, incorporating moral ambiguity with justice. Starred reviews from Booklist and Library Journal.