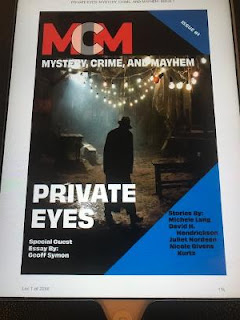 Private Eyes: Mystery, Crime, and Mayhem: Issue 1 opens with a brief introduction by Publisher Leah R. Cutter. In her essay titled, “Why Start A Mystery Magazine, she details her reason for starting the magazine and includes links to the various resources she used to bring the project to life.

That is followed by “Life of a P.I. - Just the Facts on Private Investigators” by Geoff Symon. This essay details the differences between private investigators and police detectives for those new to mysteries, and in general, crime fiction. The piece details some of the differences for P.I.’s across various states, their various roles in fiction, and how what they can and will do in real life is far different than fictional portrayals.

Then is on to the short stories. Those tales begin with “A Longshot Worth Betting On” by David H. Hendrickson. Operating out of a seedy bar, maybe the seediest in town, is Private Investigator Mick Flanagan. His latest client is one Gino Lombardi, salesperson, and somebody quick to say he is no relation to Vince Lombardi. He comes to hire Mr. Flanagan to deal with a problem that his son, soon to enter college football and ultimately the NFL, is having with a certain blackmailer. Tony Lombardi is a junior in high school. He is captain on his football team because the linebacker has skills. Flanagan had his own brief pro career so he understands that any hiccup between now and his pro career could end his football future. He also knows that the kid has enough problems without his jerkoff dad making things worse. The kid needs help regardless of dear old dad. The real question is how to go about it and end the blackmail threat.

Publisher Leah R. Cutter is up next with “Going Deeper” where Heather works in an underground bunker. She is a forensic account and reviewing the books of Quintekon, Incorporated. The books are perfect. In fact, too perfect. Everybody makes mistakes, computer systems are not perfect, etc., and yet these accounting records are absolutely perfect. Her fiend, Chelsea, agrees that something is not right. She also has a plan for Heather to be forced out of her comfort zone and become, at least for a little while, an amateur detective.

While the main character of the previous story was an amateur in terms of working as a private detective, Helen Hartsock is no amateur. She has been a private investigator for many years. Her current case has taken her to a certain laundromat in “The Definition of Crime” by Kari Kilgore. She is back in the place and again working undercover while awaiting the arrival of Martha Phelps. She isn’t the only one awaiting the arrival of somebody.

Readers are taken to the future in “The Fish” by Nicole Givens Kurtz. In this time, the beat cops are known as District Regulators and technology has made massive advances. Murders still happen and Inspector Regulators Fawn Granger and Briscoe Baker are chasing a psychotic killer known as “The Fish.” They are in a race to save lives as he kills and kills again. 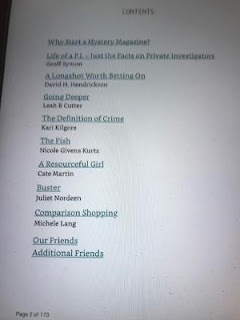 This is a futuristic police procedural tale reminiscent of the Eve Dallas Mystery Series though there is no romance angle at work here. These are cops going about their jobs and both are glad to be off of patrol and working cases as investigators. While there is a refence to Granger having walked away from police work quite some time earlier, that reference is in regard to the street patrol. This is clearly not a private investigator story. It is also a good one.

Dottie Lundegaard is used to being ignored and shuffled aside despite the fact that she notices things others don’t. It is the times she lives in as the Depression was not that long ago. Being ignored and marginalized is a way of life that extends to her brother who does not want her involved in his latest case. She soon is and that is a good thing too as there is a child involved in “A Resourceful Girl” by Cate Martin.

It is back to contemporary times in “Buster” by Juliet Nordeen. Lady private investigators can be tough too and the woman known to all as “Buster” fits the bill. Her latest client is Mrs. Alyssa Trotter. It is March 2020 and Covid-19 is just starting to rear its ugly head. Mrs. Alyssa Trotter is facing what very possibly is the end of her marriage. She has been married a little over three years to her doctor husband and she is sure he is stepping out on her. She needs help and has the money to pay though it is clear that some surveillance alone is not going to solve her problem.

It is the early 80’s and Miss Missy LaForce needs a private investigator. She found one in Amelia Pepper in “Comparison Shopping” by Michele Lang. It could also be said that Amelia Pepper found her. Missy LaForce is dealing with a stalker, but there is a lot more going on and at stake in this tale that brings the issue to a close.

While one story does not fit the stated private investigator premise and there are a few typos throughout the read, overall, this is an interesting and enjoyable issue. Set across various time periods, the tales in the issue are almost all told from the view point of the female main character. A notable exception is the opening story by Mr. David H. Hendrickson. That tale also entails a classic private detective setup and situation though the subject matter of the case is not at all common.

Overall, Private Eyes: Mystery, Crime, and Mayhem: Issue 1 is an enjoyable read and well worth your time. The tales involved are complicated as are the characters and their situations. Plenty of action and adventure where nothing is straightforward or easy. While the language might be, on occasion, too graphic for some as curse words are used in a few instances, graphic violence does not happen in the read. It is an interesting issue and this reader enjoyed it. You just might as well.

Material picked up to read and review late last month by way of funds in my Amazon Associate account.

Hi Kevin--do you know if their entire concentration is on PIS, or is it just this issue? I can't tell.

I think each issue is done to a theme. This one was supposed to be PIs only, but a police procedural type story set in the future was included.

Not sure it is relevant to your question, but, my impression also is that this is a closed market and submissions are by invite only. There have been a number of issues, at this point, and I have never seen a market call.

I'm working on an article about the PI story today, and I probably need to subscribe if it's all PI material, so as to be caught up. It's turning out to be a mammoth task, to be honest.