Finished Round 4---A Sandi Update

Sandi finished round four of chemo this morning with the injection they do at the end of each round.  This put her back in bed where she has been the rest of the day. The picture below  is from yesterday afternoon during the middle of the treatment. 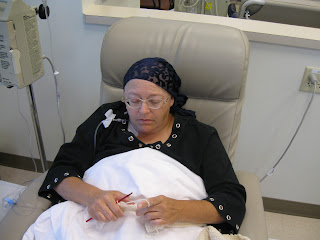 Her next test, because the Pet Scan indicates a problem with her thyroid, is some sort of ultrasound of that early Friday morning. We are not totally clear on the test they are doing or why, but apparently everyone involved is putting a rush on this and we should plan on being at the hospital for a couple of hours minimum. At least for this deal she can eat and drink normally before it which has been unheard of during this nightmare.

Others that we know have not been so lucky. When you go every three weeks to chemo, not to mention all the doctor visits and the blood work, you start seeing some of the same people over and over again. Even if he or she does not say much you kind of know how things are going by the look they have. Then there are other folks you bond with as conversations are struck up and stories are shared. Three different patients Sandi and I have met and spent a lot of time with them and their families during this process were all told yesterday it was time to go to hospice. Back in December, in at least two cases that we know about, without question the prognosis at that time had been for a far better outcome for them and their families. Their battles have been lost.

That is part of what makes this so awfully hard. You get to know people you might otherwise never have met and become fellow unwilling victims of some damn thing you can't see or feel. Some hideous creature lurks inside your body, killing from within, and even when the doctors say you are going to be okay, you just might not be. Not because you did anything wrong or the doctors made a mistake--just because the cancer proved to be too much.

On behalf of Sandi and I as well as the boys, thank you again for your cards, your letters, your notes of support and your thoughts and prayers. Thank you as well for your donations---needed more than ever right now as it is a new year and Sandi's bi-monthly insurance premiums have quadrupled and we struggle to keep her insurance in place.

If it wasn't for you out there, most who only know of us through a picture here or there, an image on your screen, we wouldn't still be here. We owe you a debt that we may never be able to repay.

We thank you for everything....

I am so sorry this agony continues for you both.

Thank you, Patti. It could be worse and we are grateful it isn't at this point.

I'm hoping for the best for all of you, Kevin.

Still praying for you, fervently. Keep the faith. You are an amazing family!

Thank you, Kaye....I appreciate it.

Thank you, Peg. We are trying.

Kevin, we're praying for you guys! Unfortunately we've joined the ranks of those suffering from this horrid disease. My husband, Louis, had surgery before Christmas, no problems were expected. Pathology showed 40% of specimens were malignant & yesterday we found out it has already spread to his bones in several locations. I'm sorry for all of us.

There is nothing to repay. It's all about helping one another as we can and when needs arise. Wishing you and yours the best outcome. Lots of prayers coming.

Thank you, Johles. It is much appreciated.