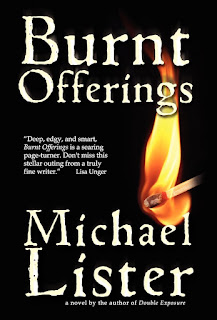 For Professor Daniel Davis and his friend Ben Greene this late September morning is the time for good natured give and take and a run along some abandoned railroad tracks in the heart of the North Florida Wildlife Preserve. The running for Daniel is not just exercise but as a means of escape from nightmares of his past. The same is true of his job these days as he has isolated himself by teaching online courses from his isolated home and working on various projects.

The problem is as Ben stops and takes a breather is that every step Daniel takes running away down the railroad tracks is taking him closer to an old abandoned rail depot. An old depot that will contain a horrific crime scene with a badly burned body at its center. Daniel is literally running himself right into a murder investigation where a killer intends to make Daniel a major player and interpreter of his horrific vision.

Florida Department of Law Enforcement Agent Samantha Michaels can’t escape her nightmares either. The latest one has put her on leave and at her mother’s home while she waits for her former boyfriend to get his stuff out of her place. She has scars now and apparently what had to be done to her was a problem for her old boss when they were in the bedroom. It was stupid to get with Stan Winston, twenty years older than her and her boss. Instead of the apologetic phone call she was expecting from him he quickly makes it clear that he just wants her back to work. Seems the Sheriff of Bay County wants and needs the help of the FDLE to investigate a case of a badly burned body. Since Agent Samantha Michaels is physically very close to the crime scene and is the closest thing to an expert the FDLE has on killing using fire she is the one to go.

Not only did Daniel find what was left of the body but Daniel has expertise that may prove crucial to the case and that initially forces Daniel and Sam to work together again. They have lots of old baggage, individually as well as relationship wise, so any investigation is going to be complicated and that is before Sam suspects Daniel of being the killer. The fact a second body, burned in time before the first, is found on Daniel’s land reinforces her suspicion that it might be him. As more bodies burn, hostages are taken, and the killer taunts them demanding Daniel understand, Sam and Daniel not only have to stop him but put aside their mutual suspicion and see if anything they once had between them can reignite.

Shifting in point of view between the crazed killer who believes he is on a religious mission and the various characters the book moves forward at a rapid pace. Character development is limited and occasionally clichéd as nearly all in the book have suffered some emotional trauma in the past. Traumas that definitely impact their way of looking at life and how they relate to others. This includes the crazed killer who appears every few pages to explain why he does what he does.

As in Thunder Beach dialogue is not set off by quotation marks but dashes at the beginning of sentences. While that works the author occasionally runs the risk of reader confusion by his addition of narration immediately following a dialogue sentence. Despite that occasional glitch, the story telling itself as well as character motivations and scene descriptions, etc. are all handed well in Burnt Offerings.

Despite the impression given in the opening pages it appears this is a stand-alone novel and not part of a series. The read is a good one that could have been better but does work well in most aspects as the novel moves quickly towards a strong ending.

Material supplied by publicist PJ NUNN owner of Breakthrough Promotions in exchange for my objective review.

Thanks for the thoughtful review, Kevin. I am a big fan of Michael Lister's DOUBLE EXPOSURE and have been wondering about a follow up...

Is it a followup?

From what I could tell surfing various places, it is not unless these characters were minor characters in that one.

Not sure how reading with dashes would go. Premise of book sounds interesting

You get used to it, Jake. It works fine except for the occasional narration issue noted in the review.