This week I thought I would do something a little different for Friday’s Forgotten Books hosted by Patti Abbott here. I thought some humor was in order. So, this week I offer up my review from a couple of years ago of The Feedstore Chronicles by Travis Erwin. I thought the book was funny, at times, and if you check it out I hope you find it funny too. 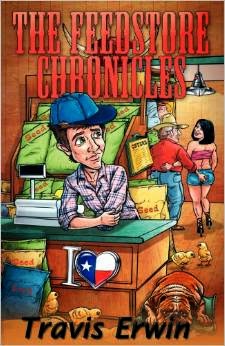 Building on his experience working at a feedstore as a teen, Texas author Terry Ervin fictionalized those years and all involved to come up with this often funny coming of age tale. Except for references to the author and two former pro wrestlers, The Feedstore Chronicles is fiction. Despite the fact it is fiction, the book on occasion will strike a strong resonance with you if you are of a certain age and grew up in Texas.

It is the spring of 1989 and the young narrator, Travis, is all of sixteen. Travis has a crush on the nubile Samantha Black who is a certain cheerleader at Caprock High School.  Doyle Suggs, thirty, twice divorced, runs Pearl’s Feed and Seed in Amarillo, Texas. Travis believes that if he had some cash from working he might have a chance with her. So, he gets a minimum wage job at the feedstore and soon learns there are very nasty jobs at the store. Not all of the nasty ones involve Doyle’s dog “Snuggles.”

While working after school making money did not do anything to get him any closer to Samantha it did let him see the world through the eyes of his boss Doyle Suggs. Doyle believes that every woman on the planet is his to bed. He is active and makes every effort to get laid on a daily basis with as many women as possible. When necessary, he is more than willing to work out a trade of some of the store product on credit for some intimate time with the ladies. Doyle also likes practical jokes, to harass his small stuff of Travis and Jerry, and to be the boss and play favorites. As the months turn into years and Travis works closer and closer to High School graduation he learns the good, the bad, and the downright ugly and smelly from Doyle.

There is no great summing up of this book that is possible. No great mysteries are solved, no meaning of life is pronounced, and no great revelations are explained. Something that was made clear from word one of the introduction. The Feedstore Chronicles is a fun read and an ode to a time when, as pimply faced Texas teens, we knew it all. For Travis it also meant he met and married the woman of his dreams. For me it means I still can’t walk into Burger King without shuddering just a little.

Occasionally graphic in terms of language and physical descriptions, this is a book of interconnected stories. Stories that have been fictionalized massively to protect those involved. Stories much like what you would tell while sitting around with your buddies and drinking beer. A fun read that does not take itself seriously nor has any deep meaning or symbolism.

Read it for fun and enjoy.

Material in the form of a PDF supplied by the author in exchange for my objective review.