Wolf Dillard had been having a great carnal dream involving himself and a local waitress until he was woken up by a very loud screech. A screech in the night that continued long  after he awoke and seemed to sort of 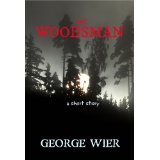 contain words in some sort of unintelligible language. Wolf made his way through his home to his screened in porch where he grabbed his shotgun from where it rested next to his freezer. By the time he got there the horrible loud noise had stopped. Karakawa County was silent and yet he knew that whatever it was out there it was in his backyard. It was big and coming for him and a shotgun may not mean much.

The Woodsman-A Short Story by George Wier is a moving and powerful East Texas tale that is not easy to explain or review. Reminiscent of his short story, The Eternal, this work also taps into elements beyond all of us that will live on far beyond the blink of humanity.

The story is also very good.

Word file was provided by the author for my use in an objective review.