Normally I would not pick a book so recently published for Friday’s Forgotten Books. But, after getting mentioned the other day as part of a review for the audio version, I thought I would go ahead and again run my review of Genre Shotgun: A Collection Of Short Fiction by Terry W. Ervin II. You should read this as well as his excellent Flank Hawk series. You should also check out the rest of the FFB list which this week is being handled by Evan Lewis. You should be reading his blog too. I would suggest some more “you shoulds” but I have exceeded my quota for the day so go forth and enjoy…

Genre Shotgun: A Collection Of Short Fiction features thirteen previously published tales classified into four categories. Published by Gryphonwood Press last year the book continues the author’s word count assault on the reading public with quality storytelling and interesting characters. Like his Flank Hawk series, there are plenty of twists and surprises in these very good tales.

The book opens with the “Horror/Suspense” category. There are three stories in this section and they begin with “The Scene Of My Second Murder.” A graveyard in the middle of the night and a long ago death are just two of the many elements in the tale. 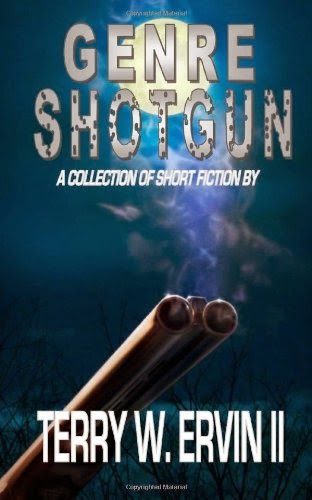 Scary stories told to young kids at a retreat or camp is a classic idea used in film as well as in books. So classic we all pretty much know how the tale will go before we read one as the names and circumstances are usually the only difference. Author Terry W. Ervin II puts a very different spin on things with “Skull Face Returns” proving there is a grain or more of truth in every story.

Scaring kids at camp also plays a major role in the next story titled “The Candy Bar Game.” A Saturday night highlight and tradition at “Camp Mekanayzn” is about to go very wrong for assistant senior patrol leader Rick in ways he never saw coming.

“Accelerated Justice” leads off the five stories is the “Science Fiction” category though several could have worked just as well in the preceding category. In the not too distant future it was supposed to be a simple trip back and forth across the border for limo driver Jack Hollister and his passenger. Classic issues still plague mankind and Jack Hollister has few options.

A deep space battle might turn the tide for humanity in “Seconds Of Eternity.” Major Parsons knows a thing or two about fighting and will push his Starfury IV to do what absolutely has to be done.

He was supposed to go into a peaceful cryogenic sleep in “Tethered In Purgatory” and await advances in medical science that could save his life. Instead, Thomas Mayvin finds himself conscious in some way and only able to observe his own body and those that come near o him. This is not at all what he paid for.

A newbie reporter two weeks out from graduation and on his first assignment is sent to Florida in “Vegetable Matters.” The reporter is to interview a Mr. Dennis Sherkle on behalf of the “Weekly Electron Star.” All reporter Marvin Petro knows is that his editor told him the story involved corporate theft and property rights. Petro will soon learn what that really means in this incredibly good tale.

Sallie Thurstin and her baby are in real trouble in “The Exchange Box.” That is until Travis Collington shows up with his special box and makes an offer she can’t refuse.

While the next category is referred to as “Inspirational” a more fitting term would be “Literary.” Despite the idea that the stories are uplifting as implied by the category term and their track record of publication, these primarily depressing tales did not strike this reader that way at all.

“It Was A Mistake” details a series of mistakes that led up to the ultimate fate. 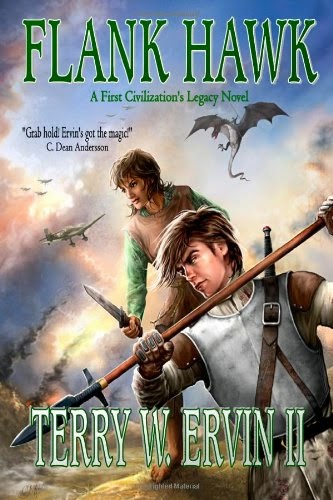 “Even Zero Can Add Up To Something” makes a point about the math involved with the number zero. A very short tale that really can’t be described--it just has to be read.

It has been a long trip, but worth it in “The Last Meeting” as a man goes home to the church he grew up in long ago.

The final two stories of the book are found in the closing category of “Mystery.” The first story features a routine day in second period Geometry until the police got involved in “Drug Dogs.” Mitch is about to have his high school life and more turned upside down and then things will get worse.

Modern day archeology and ancient secrets abound in “Fictional History.” Artifacts must be placed in context. A major find could radically change that established context.

Terry W. Ervin II is one of those writers who has many talents. Whether it is the excellent Flank Hawk  series or the tales here in Genre Shotgun: A Collection Of Short Fiction the read is a good one. This is one of those rare cases where the blurbs from author Earl Staggs and others accurately portray the book. Short stories in a variety of settings populated with interesting characters facing major and minor moments are present here resulting in a very good read.

Thanks for the reposting and the link to the audiobook review. I might've missed it!

Good stuff. I was surprised to be mentioned in connection with the audio version.